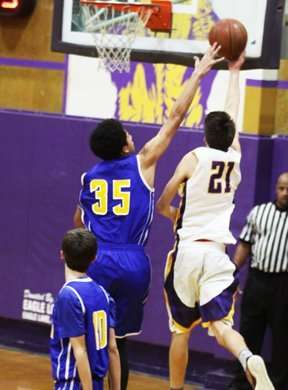 The Lassen High School Grizzlies hosted their second home pre-league basketball game on Tuesday, Dec. 13. The varsity basketball team made sure to give the Mount Shasta Bears a run for their money.

Following the junior varsity game against the Bears, the varsity Grizzlies stormed the court for a game that would ultimately result in a 87-76 loss for Lassen.

Prior to the game’s beginning, all stood for the delivery of the national anthem.

Varsity player Korbin Drake took the microphone and sang “The Star-Spangled Banner.” The crowd erupted in cheers as Drake finished the song and jogged back to his team to recognize the starters of the game.

The first basket of the night was a three-pointer shot by a Shasta Bear with 7:22 on the clock.

The Bears didn’t hold onto their lead for long, though, as Wyatt Martin made the first move on the Lassen score by shooting a three-pointer.

Chad Arnold wasted no time giving the lead to Lassen by taking a pass from Wyatt Del Carlo and scoring a basket with 6:06 on the clock.

Mount Shasta stole back the limelight with baskets at 5:48 and 5:33, thus giving them a four-point gain.

Del Carlo brought the Bears down a peg with a basket at 5:08 and thus was the last player to score in the first three minutes of the game.

Mount Shasta gained four more points via free throw and three-pointer before Martin and Justin Lloyd sank a basket each.

With 1:25 on the clock, Emanuelle DeFrancesco shot a good free throw and brought the Grizzlies within two points of their rival’s score.

Mount Shasta widened the gap by two more points by sinking a basket with 47 seconds remaining of the first quarter.

However, the two points were made negligible after Will Ashmore shot two successful free throws with less than 10 seconds on the clock.

The first quarter was called with a tantalizingly close score of 18-16 favoring Shasta.

Ashmore wasted no time upon the start of the second quarter and brought the score up to an even 18-18 with a basket at 7:31.

Two good free throws put the Bears in the advantage once more, but with 7:01 on the board, Lloyd managed to sink a three-pointer, thus rocketing the Grizzlies to the leading spot 21-20.

The teams then juggled, which lead the score over the next two minutes.

Shasta scored two free throws, but Jacob Bennett followed closely behind with a basket. The Bears shot a three-pointer, but only retained their celebration for 58 seconds as Martin followed with a three-pointer for the Grizzlies.

Finally, the juggling was put to a pause with a Shasta timeout. The 26-25 score favored the Grizzlies, and the Bears were not pleased.

Shasta scored a three-pointer with 5:09 on the board, giving them the lead.

Arnold then scored a basket from a teammate’s rebound and announced the score a tie with 28 points for each.

The downfall for Lassen came at their seventh foul. The Bears’ tally spiked up another two points after two good free throws.

Lassen countered with a basket made by Arnold with 3:30 on the clock, but another foul sent the Bears behind the free throw line for another good point.

After yet another Grizzly foul, Lassen called a timeout with 2:40 on the board. The score stood at 33-30 favoring Shasta, and the Bears were ready for another two free throws upon the end of the timeout.

The Bear free throws were not good, thankfully, but they were followed up with two Shasta baskets lengthening the score gap to a seven-point difference.

Lassen’s Lloyd brought the gap back down to four points with a three-pointer shot with two minutes on the board.

While Shasta countered with a three-pointer at 1:41, Lloyd made his point clear with scoring another three points at 1:28.

Shasta scored a basket at 1:09, but Lassen was ready to counter. Lloyd sunk a basket after a rebound by Del Carlo to bring the score up to 42-38.

The Bears made their final basket with 25 seconds on the board, but Del Carlo cancelled out the Shasta success with a basket with 0:08 on the clock.

The second quarter was called with a score of 44-40 on the board, again favoring Mount Shasta.

The halftime break allowed both teams to recharge and gear up for the rest of the game, and the audience was kept spirited by the Lassen High drill team and cheer squad.

With Christmas sweaters sported by the drill team and green shirts with snowflakes worn by the cheer squad, the halftime break was filled with dancing to Christmas tunes and stunting with smiles.

Lassen made a quick comeback upon the first minute of the third quarter.

Arnold scored a basket with 7:38 on the clock and was closely followed by a basket by Lloyd.

The shock of the Grizzly power overwhelmed Mount Shasta, so a timeout was called as 44-44 shone on the board.

Shasta regained their spirit and scored a basket with 6:28 on the clock.

Lassen added a point to their tally with a free throw shot by Kevin Barnetche.

Mount Shasta scored a basket at 5:41.

Shasta attempted to escape the tie with a basket, but Barnetche quickly retaliated with a Lassen basket, thus bringing the score to 50-50.

Shasta managed to sink two basket in the next thirty seconds, but Del Carlo and Lloyd countered with two Grizzly baskets prior to the end of the fifth minute of quarter three.

Shasta shot a three-pointer with 1:29 and repeated the act with 1:04 on the clock. With a secured six-point gap between the Bears and the Grizzlies, Shasta loosened their grip.

Arnold embraced the opportunity and scored a basket with 42 seconds on the clock.

Mount Shasta scored the final points of the third quarter with a three-pointer with 0:30 on the clock.

Quarter four began with a 63-56 score on the board, Lassen at the disadvantage.

Mount Shasta immediately widened the scoring gap by four with a basket and two free throws by the 7:30 mark.

Arnold was back in the spotlight with a basket at 7:10.

The Bears shot a basket with 6:32 on the board, but Lloyd made a countering basket 12 seconds later.

A timeout called an end to the scoring madness and allowed the board to rest with a score of 71-62, Bears, on its face.

Del Carlo shot a good free throw for Lassen to bring the Lassen tally up to 63, but Mount Shasta was sure to score a basket within the next 15 seconds to boost the Bear score to 73.

Shasta then gained another four points with two baskets in the span of 30 seconds.

Ashmore was brought back onto the court and scored two free throws with 2:30 on the clock.

Martin then gave Lassen an even larger boost with not only a basket at 1:59, but also a free throw that made its way through the net.

A Mount Shasta timeout gave the audience a chance to breathe through all the mayhem and notice how much the boys were panting on the court. Clearly hearts and souls were left on the court that night.

Ashmore scored another basket with 1:20 on the clock before another timeout was called.

A score of 80-73 shone on the board, inspiring both teams to just make it through the next 80 seconds.

Mount Shasta experienced a huge leap in points after the timeout as Lassen made their seventh, eighth and ninth foul. With five points gained from free throws and two points gained by a basket, Mount Shasta was clearly anticipating the gold.

Lassen refused to give up heart, though, as Arnold made the final points of the night with a three-pointer in the final eight seconds of the game.

The score was called with 87-76 on the board, not favoring Lassen.

While the loss was not the desired result for Lassen, the Grizzlies were proud to say that they were a mere 12 points shy of beating a team in a higher division.

The game provided Lassen with experience playing a team with higher rankings and thus allowed the Grizzlies to understand different techniques they should focus on in practices.