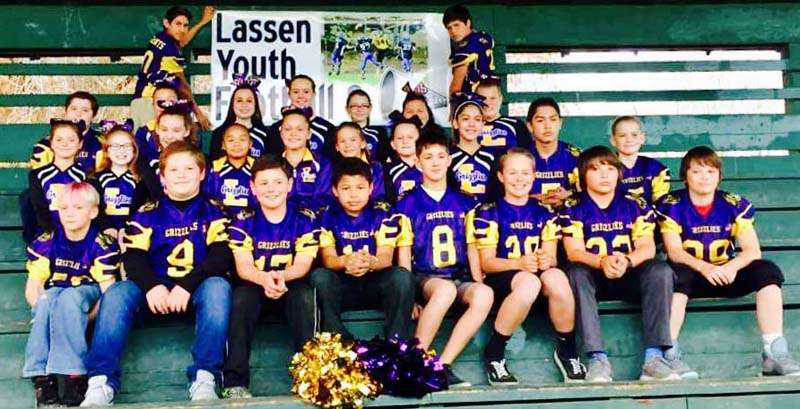 The 2016 Lassen Youth Football players and cheerleaders were truly dedicated this season.

The football teams played a total of eight games throughout this year’s season.

The freshman team battled through a tough schedule this year, but they were able to fight their way into the playoffs. The boys lost to the first seed team, but their effort never ceased to amaze.

According to coach James Lynn, the freshman team displayed true sportsmanship throughout the year by recognizing the need for teamwork rather than solely individual effort.

The All-Star nominees for the freshman team were Zeke Christiansen, Gavin Brewer, Trevor Weir, Deshon Moore and Peyton Garate. Lynn said that the mentioned boys continuously set a solid example of what it means to be a student athlete.

“While not every player can make the All-Star team, every player did contribute to a successful year of teamwork, learning and fun,” said Lynn.

The junior varsity team finished the season with a 4-4 record.

The boys were also able to make their way into the playoffs, as they were the number eight seed. By the end of the season, the team had 17 players on their roster.

Throughout the year, the team ran into challenges and faced some adversity. However, they still kept their game faces on and finished strong.

Lynn commented, “Although we lost our playoff game, our team played with heart and battled the entire game. I am very proud of all the young men that were a part of this team.”

While it was difficult to narrow down the selection of All-Star nominees because so many players deserved it based on their 2016 performance, the All-Stars were eventually picked.

Lynn commented that some of the characteristics sought out for the All-Star team includes performance on the field, attitude and work ethic.

“I truly hope that the entire team continues playing football and more sign up next year,” said Lynn.

Teresa Estrada, the public relations manager for the league, said that many of the All-Star players have been with Lassen Youth Football since entering as a bandit, a group for children between five and seven years of age.

“They have been dedicated to the sport for at least four seasons and will return every year,” said Estrada.

The children who have been placed on the All-Star teams have exhibited and exceeded all of the above-listed characteristics.

With respect to cheerleading, there were two squad this year: freshman and collegiate.

The freshman cheer team had a great year. Due to the varied ages of the girls on the squad, the freshman team competed at the junior varsity level for competition.

The jump was exciting, but it was still a challenge for the girls. However, the squad showed that challenges only made their bond stronger. The team placed third out of seven competing squads.

In addition to cheer ability, the All-Stars of the squad were selected based on their attitude, effort, commitment to the team and understanding of the meaning of teamwork.

The freshman cheer coach commented, “Cheer is a tough sport, and the dedication that these cheerleaders have given through blood, sweat and tears is something to be proud of.”

The coach recognized that each of the All-Star cheerleaders were punctual and prepared every day. The cheer world consists of many last-minute changes, but the girls proved to be a perfect mixture of spontaneous and flexible.

The collegiate cheerleaders had a similar experience as the girls had a strong bond from the beginning of the season through the last performance.

The squad was small, but the girls made up for it with their tight connection. Additionally, the squad girls varied with age, but the challenge only made them stronger.

There were four girls on the squad who are gearing up for high school and have been cheering with Lassen Youth Football for several years.

All of the girls on the squad were returning cheerleaders. Many have been participating in cheer from a young age.

The collegiate cheer coach commented, “They are all great young women and I hope they all decide to continue cheering.”

She later continued, “I was very fortunate that I had such a great squad to coach my first year.”

The Lassen Youth Football League was a huge success this year as it had great football players and cheerleaders to represent it well.

The league is looking forward to the 2017 season to see these young men and women continue to grow and flourish.