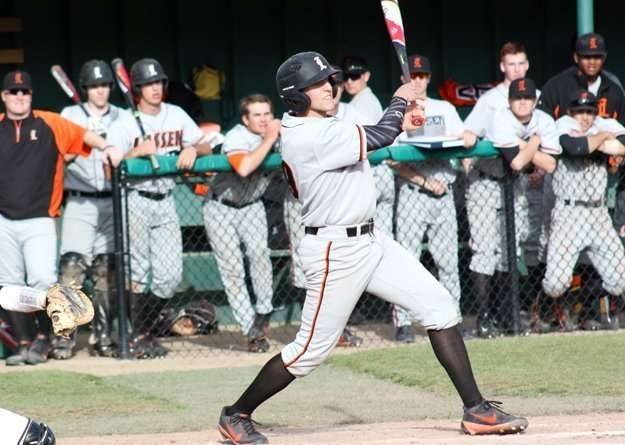 After securing two wins against College of the Siskiyous on Friday, March 17, the Lassen College baseball team earned the first place ranking for the Golden Valley Conference.

Lassen finished off the Siskiyous games to bring their conference record to 6-2 and their overall record to 11-9. Lassen’s conference win percentage rose to 75 after the games; the runner-up to Lassen is the Feather River College with a win percentage of 67.

In the first game against the College of the Siskiyous Eagles was a 13-8 win. The second game was a 5-4 win for the Cougars.

Game one had Lassen start on the offense.

In the first inning, McClain O’Connor started the afternoon with a single to left field.

Raymond Kerr singled to right field and O’Connor took a dash to solidify his spot on third base. And, while Kyle Whitted was at bat, Kerr showed off his skill and stole second base.

Eric Carlson earned the first walk of the game after being hit by the pitch, and with the bases loaded, Kevin Montgomery took his place at bat. When Montgomery singled, he brought in two runs as both O’Connor and Kerr scored before leaving Carlson on second base.

Nathan Hedberg singled next and allowed Carlson to score before the inning ended and both Montgomery and Hedberg were left on their bases.

During the bottom of the first, Gehrig Parks gave away two hits and one run.

Inning two saw Ryan Thomasy on third and O’Connor on second as Daniel Perry stepped up to the home plate. A second base error sent Perry to first and O’Connor to second as Thomasy scored.

Next, Whitted singled to right field and brought O’Connor in for Lassen’s second point of the inning.

Perry was next in for the Cougars after Carlson hit a sacrifice fly to center field.

Hedberg doubled to bring Whitted in and Montgomery took the opportunity to advance to third.

After a wild pitch by the Eagles, Montgomery scored and Hedberg advanced to third place.

With a total of five runs, three hits and three errors, the Cougars traded in their bats for gloves.

College of the Siskiyous saw a great second inning as well. The Eagles had five hits and three runs. Parks also struck out one batter before Lassen returned to the offense for inning three.

Neither Lassen nor Siskiyous scored in the third inning, but Parks was able to pitch his second strikeout of the game during the bottom of the inning.

Hedberg was the only one to score a run in the fourth inning after being hit by the Eagles’ pitch, advancing to second on a wild pitch and rounding third to sprint home with Alex Vaencia’s single.

Lassen saw their next run at the top of the sixth inning after Montgomery ran from third to home while the Eagles were focused on Thomasy’s sacrifice fly to left field.

During the bottom of the seventh inning, Jared Kiessling made his way to the mound to pitch. Kiessling gave one hit and two runs during the inning, but he also struck out two Eagles to send the Cougars back to the bat.

Thomasy hit a sacrifice fly during the top of the eighth inning and thus allowed Carlson to make Lassen’s 11th point while Hedberg advanced to third base and Valencia advanced to second.

O’Connor hit next with a single to center field. After the hit, Valencia advanced to third and Hedberg scored.

Kiessling pitched for the bottom of the eighth inning and gave the Eagles two runs.

Perry was the only Cougar to score during the ninth inning. Perry had made his way around the diamond with three hits from the pitcher and a walk. Whitted, Luke Smith and Hedberg were left on the bases when the inning was called.

For the Eagles’ final inning, Jack Bell was up to pitch for Lassen and struck out two,

Thus, with a great show of effort from both the offensive and defensive plays, the Cougars ended the first game with a 13-8 winning score against College of the Redwoods.

The second game was a less dramatic win of 5-4, but the Cougars still showed their effort and determination on the field and thus left with the victory.

Lassen didn’t have the immediate burst of energy seen from the first game, but Perry still made sure Cougar fans had a show. Being third up to bat following two Cougar outs, Perry singled to left field and later stole second, much to the Eagles’ dismay.

Cougar Raymond Kerr pitched for the first seven innings of the game and started off by giving only one hit to the Eagles and striking out the next one to meet the bat.

In the second inning, Thomasy reached first base on a fielder’s choice and allowed Hedberg to make the first point for Lassen.

Siskiyous caught up to the Cougars during the bottom of the second as Kerr gave up one run.

However, Lassen was quick to reestablish the lead with two runs.

Hedberg brought Perry in from a single and sent Carlson to second. Kiessling followed with a single that brought Carlson in and send Hedberg to third.

After a fly ball gave Lassen their third out, the Cougars were sent to the field.

Kerr struck out another Eagle at the bottom of the third, and the next two at bat were sent back to the bench with just as much success.

Siskiyous were next to score a run and bumped up their score to two points at the bottom of the fifth inning.

They then scored another run at the bottom of the sixth after two hits and tied up the score 3-3.

Lassen broke the tie during the top of the eighth inning. Thomasy singled to left field and brought in Robert Lujan who was on second base prior to the hit.

The Eagles were determined, though, and after Connor Flaharty took over the mound for Kerr, Siskiyous managed to score one run.

After the run, Jacob Conklin went in to pitch and struck out two.

Lassen made one hit in the ninth inning, but no runs were made.

At the bottom of the ninth, the Eagles managed to load the bases, but when Jack Bell approached the mound to pitch, two more Eagles were struck out to leave College of the Siskiyous with just as much luck.

The 10th inning was initiated with a walk granted to Valencia, and upon meeting first base, Quinton Smith swapped out with Valencia to run.

Quinton Smith advanced to second after Thomasy sacrificed his hit and grounded out to the pitcher.

Quinton Smith then advanced to third when O’Connor doubled, and when Parks hit a sacrifice fly to center field, Quinton Smith scored for the Cougars.

Lassen then played it safe and focused entirely on defense throughout the bottom of the 10th inning.

Three outs in a row brought the game to a 5-4 end favoring Lassen. With the double win, Lassen secured their spot as the first place team in the Golden Valley Conference thus far.