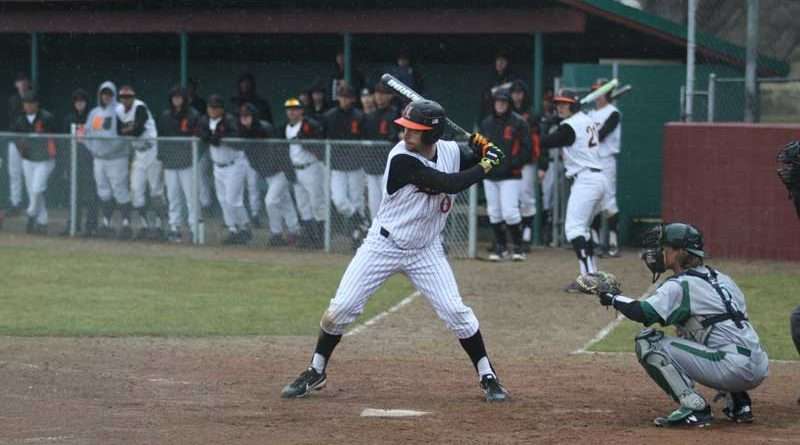 Lassen had initially intended to host a doubleheader, but with a 10-0 Cougar score ending the first game and no signs of the rain letting up, the second game between the Cougars and the Knights was postponed.

After hosting the Knights, Lassen then traveled to the Shasta College diamond for a rematch Sunday, March 11. The away game was not as favorable for the orange and black team; Lassen finished the game on the short end of a 10-7 score.

While at home, though, the Cougars certainly braced the rain with pride for the beloved crowd of Lassen fans.

Shasta was first at bat while on the Cougar home field.

Pitching for the Cougars for the entirety of the game was Connor Fleharty, who started off strong on the mound with two strikeouts and no runs in the top of the first inning.

The Cougars earned their first run in the bottom of the first inning. Sami Baig started the inning off with a single, then stole to second, advanced to third, thanks to Ryan Thomasy sacrificing his hit, and finally scored when Eric Carlson doubled.

Baig’s run was the only one of the inning, but it definitely proved to be a hard act for the Knights to follow.

Fleharty gave another strong performance during the top of the second inning with only one hit and one strikeout.

Lassen had two hits during the bottom of the second and ended the inning with two Cougars on base.

Two strikeouts and no hits initiated the third inning for the Shasta Knights, but the Cougars didn’t do much better in the bottom.

Inning four saw one hit from both the Cougars and the Knights, but no runs from either team.

During the top of the fifth, the Knights again made one hit, but their success ended there. Whether it was the fast pitches by Fleharty or the unforgiving weather, the Knights were clearly off of their game.

However, things started to heat up on the field during the bottom of the fifth as the Cougars managed three runs in total with four hits and two runners left on base.

Jared Kiessling singled and then advanced to second when Mitchell Menns followed with a single. Baig stepped up to the plate and singled as well to load the bases for Thomasy.

Thomasy reached on a fielder’s choice that sent Kiessling out and again loaded the bases, this time for Carlson.

Carlson doubled and sent in Menns and Baig while allowing Thomasy to advance to third. And after Jordan Taylor walked, Thomasy scored with a sacrifice fly from Robert Lujan to thank.

The top of the sixth inning saw Fleharty only give up one hit before it was time for the Cougars to take the bat.

Kiessling singled in the bottom of the sixth, but was caught stealing. He was the only hit recorded for the Cougars throughout the inning, thus the seventh inning began with 4-0 still on the board favoring Lassen.

After the Knights started off the inning with an out and a walk, the Cougars completed a double play to get back to behind the bat.

Thomasy was the first to reach for the inning with a single, and after Carlson was hit by the pitch, Thomasy advanced to second.

Taylor doubled to send Thomasy in as well as advance Carlson to third, and a single from Lujan sent both Cougars in.

Tiler Whiteaker pinch ran for Lujan and advanced to second after Lincoln Turner singled. Jarryn Wee was hit by the pitch and loaded the bases for Kiessling.

Kiessling then flied out to center field for a sacrifice fly to bring Whiteaker in.

Afterward, Menns hit and ran, but he didn’t make it to first before the ball. With three outs, the Cougars finished the inning with four runs, four hits and two runners left on base.

The Knights put in one last inning of effort before calling it a game.

During the top of the eighth, The Knights had one hit and two outs by the time the final Shasta player stepped up to bat. The batting Knight singled, but upon an attempt to advance to second, the Cougars worked together to move the ball from third base to first to shortstop and ultimately tagged the Knight out.

Lassen stood up to bat for the final time in this game, and the Shasta pitcher clearly wasn’t pleased.

After switching out the Shasta pitcher, Whiteaker singled to bring Thomasy in, send Carlson to third and Krause to second.

Turner followed with another single to bring Carlson in and thus end the game with a 10-0 score favoring the Cougars.

The final score of the eight-inning game marked the third conference win and the ninth overall win of the season.

The second game of the doubleheader was postponed until mid-April due to the rain.

The Cougars then took to the road and followed the Knights home March 11 for another game.

Unfortunately, the Cougars couldn’t quite repeat their Saturday groove and ultimately lost the game with a score of 10-7, Shasta.

While at Shasta, Lassen saw a total of nine pitchers on the mound with a total of six strikeouts made as well as 10 hits, 10 runs and 11 walks given.

Lassen was first to impact the scoreboard with a run scored by Turner in the top of the second inning; RBI was credited to Kiessling.

Shasta countered with their first run earned in the bottom of the third, but Lassen refused to let go of the lead for long.

In the top of the fourth, Turner advanced to second on a wild pitch and sent Jordan Dicus to third before scoring on an error by the catcher.

Shasta countered with two runs brought in during the bottom of the fourth inning, and, for good measure, the Knights brought in another run in the fifth inning.

In the top of the sixth inning, Lassen attempted a comeback with three runs brought in thanks to an error by the second basemen and a home run hit by Turner.

With Lassen in the lead 5-4, the Knights started the bottom of the sixth with a new dose of determination. One run scored in the sixth evened out the score 5-all.

Shasta really bumped it up in the eighth inning, though, as the Knights managed to double their score with a total of five RBIs.

A little blown away by the sudden change in the winds, Lassen struggled to recover during the top of the ninth inning. However, they refused to give up.

Baig was credited with an RBI in the top of the ninth inning after singling to load the bases and bring Kiessling in.

Then, Dicus grounded into a double play with just enough time sprinting between first and second base to allow Aiden Leahy to score.

The Cougars ended the game with seven runs to their credit, and although it wasn’t enough to take back the win, the game was definitely a positive performance from the Lassen men.