With contentious budget talks surrounding Lassen Community College in recent months, September’s board of trustees meeting brought more news — Not of layoffs, but of an approved, albeit unbalanced, budget with no cuts.

Those in attendance breathed a sigh of relief as the budget proposal at the board’s Tuesday, Sept. 10 meeting included no cuts to positions at the college, with several college employees expressing their thanks. However, the exhale was caught short by the same people communicating frustration with the process of department and employee input.

Carol Montgomery, chapter president of CSEA Lassen 591, gave thanks to the board for deciding to not layoff classified staff.

“I would also like to thank you for directing the administration of the college to go back and work with staff to try to come up with some alternative solutions to save the district money,” said Montgomery, however, she redirected her thanks to a concern she had saying, “Unfortunately, what happened — and what I thought would be happening — turned out to be very different. What actually happened was the superintendent/ president emailed a message that talked about going forward, arm-in-arm, as partners with our team members on campus and working together.”

She continued to describe that the reports sent to the campus were not “user-friendly and difficult for most to decipher,” and would have made more sense to have the department meetings, “where all staff could review their individual budgets, and seen where reasonable cuts could be made, along with campus meetings with staff, who are familiar with our budget, to discuss viable solutions.”

She also told the board that as the classified staff members, “We as a group, felt that it was important for you to see the wasteful, unnecessary spending practices of the college that we feel have contributed to the situation we find ourselves in, along with some suggestions.”

Montgomery told the board the timeline for submission of input — coupled by the lack of information for years of financial trends, and what she called “unusable reports” — gave the impression of insincerity to the classified staff. Insincerity pertaining to the administration’s endeavor to seek input from the campus community.

Thanks were also given to several members of the administration from Tara Bias, administrative assistant to the associate dean of student services, who spoke about convocation as well-ran.

However, Bias also told the board, “My concern is, today at convocation. It was on there; we knew it was happening — this budget discussion. During this discussion, some really important administrators that I feel should have been there to have this discussion, chose not to be there.”

Bias did not speculate as to why they were not present, but asked the board to look into why the particular absent administrators were indeed not present at the budget discussions.

LCC president Dr. Marlon Hall, too, gave a report on efforts to bring changes to California’s Student Centered Funding Formula — or to at least revise its implementation strategy to fulfill its intent.

The board listened to discussions on possible solutions, based on feedback from the college’s budget forum it held during its convocation.

LCC’s Dean of Instructional Services, Trevor Albertson, shared the feedback from the discussions at the board’s meeting where he told of the top six suggestions from participants.

The suggestions ranged from creative ways to save electricity, to selling surplus equipment at auction and even obtaining an in-house attorney for legal work.

There were even suggestions of shifting certain workers to grant-funded, even if it meant shifting jobs entirely.

One of the suggestions — which was the most prevalent — was what is called a “golden handshake.”

The concept centers on providing employees significant severance packages in exchange for their loss of employment.

Albertson reiterated that no commitment was taking place to move forward with any of the ideas and he was simply relaying the responses given.

He also shared that LCC was not accepting any more correspondence students because it had reached its threshold.

“Essentially we’ve reached our 50 percent threshold on correspondence,” said Albertson. “Therefore we are turning back individuals that desire some correspondence because once we exceed 50 percent of our students enrolled in correspondence … we are no longer eligible for federal funding.”

Dr. Hall gave the board an update on his efforts concerning LCC’s budget reductions.

Hall, along with Lassen County Supervisor Tom Hammond, traveled to Sacramento to attend the SCFF Oversight Committee and meet with Senator Brian Dahle.

After listening to various comments on the agenda from the public, Hall was asked to speak about the funding formula’s effect on LCC.

Hall was provided copies of a spreadsheet, given by the San Bernardino Community College District, showing that LCC was the hardest hit of all districts.

The spreadsheet states that the current implementation of the state’s SCFF fails to meet the intent of legislation established in the education code.

It requests the Oversight Committee either fully fund the SCFF, which is short by $103.6 million as of the 2018-2019 Second Apportionment.

The other option is requests to take swift action to remove the 8.13 percent constraint applied to only “successful districts,” apply the shortfall equally to all districts; and provide predictability to all districts, and not just those that are under the hold harmless clause.

Afterward, Hall was able to speak with Christian Osmena, of the Chancellor’s Office, concerning an increase to LCC in October.

Hall then met with Dahle’s chief of staff, John Cook, about the circumstances. Cook was amazed that the majority of the districts that showed the biggest cuts were in Dahle’s district.

From Hall’s account, this sparked an immediate response where Cook led Hammond and Hall to Dahle on the Senate floor.

Hall told Dahle that pressure was needed on his end to Chancellor Oakley about LCC’s budget issues. The Lassen County Board of Supervisors will also be providing a letter of support for LCC in the matter.

Hall also took the opportunity to share his attendance at the Sept. 16 Board of Governors meeting to speak on the college’s funding shortfalls. 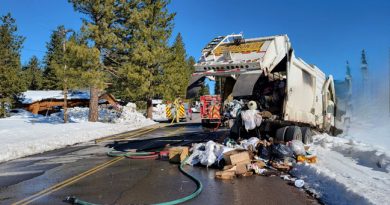