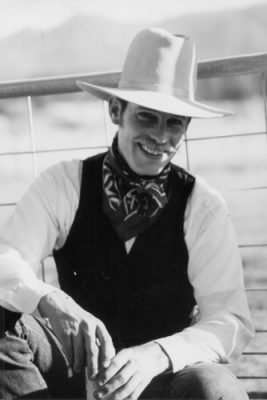 Cory passed from this life on Oct. 29, 2019 in Chacon, New Mexico. Born in Susanville, California to Patricia Smith and a father we will not mention, he was later adopted by James H. Moore.

Soon after graduating Lassen High School in 1984, he left home to buckaroo in northern California and northern Nevada.

At just 20 years old he found himself managing the Inner Mountain Ranch just outside of Reno, Nevada, where he married Lorraine Brown. From this marriage three children were born, Jessica Renee, Callie Jo, and Patrick William. The family lived in Standish, California until Cory was offered a ranch managing job in Chacon, New Mexico for the Shaffers where he resided until his death.

Aside from managing ranches, he shod horses in his spare time, started quite a few colts, cowboyed every chance he had, was one heck of a welder, hunted every season and guided for several outfitters and family.

For a short time, he lived in Questa, New Mexico, where he welded for the mining company. Returning to Chacon, he then became a welding teacher at Luna Community College in Las Vegas, New Mexico.

Loving everything he did, students and people around him grew to appreciate his skills, and many became close friends.

Nicknames were many but most new him as “Cowboy Cory,” “That Crazy Gingo,”and “A Pretty Good Man.” He was a black and white kinda guy, he either loved you or would have nothing to do with you.

Some knew of his great poetry skills and all knew of his jokester ways! His steel trap memory made for some great storytelling. A tough man he was, hard-headed as they come and a heart not big enough for all the love he had.

Cory loved New Mexico, loved and was loved by very many friends he made there; loved the culture, the people, the traditions and the history. He may not have been born a New Mexican, but he surely died as one!

Dale Ray Elder was born June 16, 1962 to Ferrell Dean Elder and Nancy Jeanette (Walker) Elder and passed away Nov. 6, 2019 in Salem, Oregon due to illness.

Dale graduated from Lassen High School in 1980. He then attended Lassen Community College for a year. In 1979 he enlisted in the California Army National Guard and served six years.

On May 7, 1983 he married his high school sweetheart, Cora Roylene Thomas, and together they attended Humboldt College in Eureka, California. Dale earned a degree in forestry. He was a strong leader and an inaugural part of the college’s Forestry Club, where he was dubbed “Bull of the Woods,” a nickname he was very proud of.

After college Dale was employed by Jeld Wen Corporation in Susanville, California and later Bend, Oregon. Shasta Raylene Elder joined their family on Nov. 8, 1993, and several years later they moved to Dallas, Oregon where Dale was employed by Oregon State Health Services. He earned his master’s degree in public health and an extreme master’s degree in health administration. During this time in Dallas, Oregon, he was a member of Polk County Sheriff’s Department Reserve. He was a life member of the National Rifle Association.

Dale was preceded in death by his father, F. Dean Elder; a new born son, Gregory Ryan Elder; and his wife, Cora Roylene (Thomas). He is survived by his daughter, Shasta R. Elder, of Dallas, Oregon; his sister, Julie A. Herndon (Doug), of Janesville, California; his mother, Nancy J. (Walker) York and step-father, Jerry A. York, of Lander, Wyoming; along with several uncles, aunts, nephews, nieces, cousins and friends, whom he loved dearly.

At Dale’s request there will be no services. The family asks that you remember Dale in whatever capacity you knew him. In lieu of flowers or cards, please feel free to make a donation in Dale’s honor to the National Rifle Association.

Patricia Francis McKee passed away of natural causes Nov. 15, 2019 in Taylorsville, California. She was born in Los Angeles, California on Nov. 5, 1925.

She is survived by her son, Michael McKee, of Litchfield, California; daughter Susanne and Bill Sintz, of Columbus, Ohio; five grandchildren; and seven great-grandchildren. Services are pending at this time.