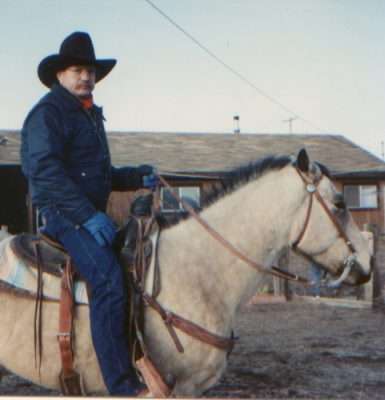 Jay Bishop was born Dec. 11, 1945 to Jackson “JC” Bishop and Madeline Dietz in Seattle, Washington, where DJ was stationed in the U.S. Navy. Soon after Jay’s birth the family moved to Imperial County, California, where Jay’s younger brother, John Charles was born. Not long after, they moved to San Diego, California, where Jay and John grew up. Jay would later reminisce how special it was that he was able to attend kindergarten through high school with the same group of friends.

Jay loved horses and managed a string of horses for two different outdoor camps in the San Diego area: a military morale, welfare, and recreation camp; and Camp Marston, YMCA Camp in the San Diego mountains near the town of Julian, California.

Throughout his life Jay did not feel complete without a horse or two in the corral or on the back acreage. He also later enjoyed assisting his children with numerous 4-H and FFA animal projects.

Jay studied social sciences at San Diego University until he enlisted in the U.S. Navy Reserve in September 1965. He served a year in Vietnam from 1970 to 1971, and was awarded the Navy Achievement Medal with Combat Distinguishing Device. After an honorable discharge from the Navy, Jay resumed his education at San Diego State University, where he received a bachelor’s degree in social sciences. He was then employed as a juvenile probation officer for San Diego County for approximately 15 years.

Having a lifelong love of the outdoors, Jay often visited friends in Lassen County, and enjoyed hunting and fishing there. He seized an opportunity to transfer to the probation department in Lassen County and moved there with his family; his wife then, Terry; daughter, Jessica; and son, John. Jay worked for the Lassen County Probation Department from 1984 until 1994. Jay also taught criminal justice classes at Lassen Community College, traveling to outlying areas to extend education throughout the county.

Jay served the youth of Lassen County as a member of numerous boards and committees and as the director of a group home. He later extended his love of working with students and families by becoming a substitute teacher, feeling comfortable with children of all ages, as well as special needs students.

In 1995 Jay met and married his present wife, Nora Bishop, nee Eckman whom he called his “school marm.” They lived in Janesville, until ill health forced Jay to move to Eagle Lake Village earlier this month.

Jay was very proud of being a member of the Lassen County Search and Rescue team, serving for several decades on the horse team as well as searching on foot.

He loved hearing stories of their world travels and successes in school and life.

Jay is preceded in death by his parents, brother, and son. He is survived by his wife, Nora Bishop; daughter, Jessica (James) Birchenough; and grandchildren. Jay will be missed by all who knew him and enjoyed his quirky sense of humor.

He is survived by his wife, Linda Bohanon. They were married for 49 years.

He is also survived by his brother, Dan Bohanon, of Nevada and James Bohanon, of Mesa, Arizona. He is preceded in death by his mother; two brothers; and three sisters.

Before retiring he worked for the city of Susanville for 38 years. He was a volunteer fireman for the city where he retired as a lieutenant after 14 years.

Bimbo had a love for vintage cars and trucks and spent most of his time restoring his old truck. He also loved going to car shows and spending time with friends.

Bimbo will be greatly missed by all who knew him. There will be no services at this time.

Georgie Rivard was born Oct. 11, 1938 in Sacramento, to Charles and Betty Bennett.

The family moved from San Leandro to Susanville in 1953, where she started her sophomore year in high school. Shortly after graduation in 1956, she married Darrell Miller. They had two sons, Robert and James. She was a very active mom in all of their activities growing up.

She met her knight in shining armor, Roger Rivard, and they were married on her birthday in 1980. They bought an RV and spent much of their time traveling.

Georgie and Roger moved to Red Bluff in 1994 due to his health issues. They were members of the Elks Wapiti RV club, and spent many happy years with their travel buddies until his passing in 2002.

She was known as the “salad lady” when she helped the Emblem Club with their Wednesday night dinners, and she and her good pal, Pat, chopped lettuce and tomatoes for the Elk’s Taco Tuesday.

Georgie met a wonderful gentleman, Ray Hammerstedt, and they were together until his passing in 2015.

Georgie was a sweet, gentle lady, best mom ever, loyal friend, and adored big sister. We will miss her so very much, but know that she is finally free and happy. I love you, sis.

A Celebration of Life was held Feb. 8. at Cone Community Methodist Church in Dairyville.