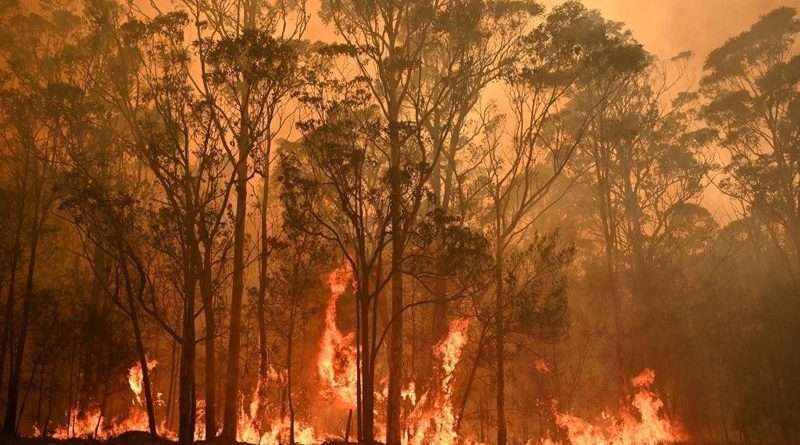 Rick Noggles, Battalion chief for Almanor Ranger District and Lt. with the Janesville Fire Department, was selected to help combat the extreme wildfires in Australia, recently. Noggles was recruited along with Jeremy Stocks and Jeremy McMahon, both of whom work for the BLM locally. The trio was assigned to United States Task Force 1 to depart for Australia on Dec. 30.

The U.S. Forest Service selected 44 firefighters from 20 states to battle the blaze which had originated weeks prior. Noggles’ team was assigned to Queensland and the Gippsland Region of Victoria for one month.

Noggles explained, “It was chaos upon arrival due to the addition of several hundred bush fires ignited by multiple dry lightning storms erupting on New Year’s Day. These new blazes prompted the evacuation of more than 10,000 residents who fled to the beaches of Mallacoota before being rescued in the Pacific Ocean by the Australian Navy.

There were multiple safety briefings for the Americans, along with training sessions for learning how to drive on the right side of the road — meaning the left. Noggles was then assigned to one of two strike teams composed of a combination of fire -fighters from the U.S. Forest Service and local drivers who volunteered from Department of Environment, Land, Water and Planning and Victoria Country Fire Authority staff.

Even ordinary tasks presented unique challenges for the newcomers. Noggles shared, “On Jan. 5th we went out into the bush to assist with information gathering and suppress any fires we encountered. Part of the assignment was to check on a ranch no one had been able to get to yet.”

“The rancher directed us to a few areas burning on the ranch, and we sequentially worked to put them out. At the first site our designated chainsaw operator started cutting a burning log, and the vibrations spooked a spider the size of two silver dollars that hurled itself towards the saw operator nearly landing right on him, before skittering off into the charred grass.”

Noggles has witnessed more than his fair share of severe fires during a career spanning 37 years, yet the magnitude of the destruction shocked the veteran firefighter. “The devastation to the people, livestock, wildlife and forests of Australia is truly hard to comprehend,” said Noggles.

In addition to the immense heat, smoke from the fires was incredibly thick for the entire month of January. Air quality in southeast Australia was rated the worst on the planet during this period. The Australia Open was postponed for days due to the smoke and its effect on athletes in Melbourne.

Besides hazards normally associated with fighting fire, Australia has a host of extreme dangers for outsiders to be wary of: dangerous and poisonous wildlife, particularly venomous snakes, spiders and other insects – even falling eucalyptus trees.

Noggles recalled, “You had to be extremely careful wherever you stepped, looking up for falling trees and looking down for snakes and five-inch spiders. Once when our team was searching for hot spots along a dozer line, a Tiger Snake, one of Australia’s deadliest reptiles, attacked us.

The three-foot long snake actually chased us with its head up in the air striking five or six times. Luckily, we escaped, but it was a very close call.”

Of course, more appealing creatures have also been affected, noted Noggles. “The devastation to Australia’s wildlife populations has been catastrophic due to these fires — particularly for forest animals.”

“The last week we were in East Gippsland, our liaison asked if we would like to help him bandage a Joey Roo.  We all went gaa-gaa with the thought.

“After assisting with removing and putting on fresh bandages, we went to the local grocery store and purchased more supplies —bandages, tape, gauze and even some extra thick pads to relieve pressure on burns.   The local ambulance service contributed items, too.

“We then assisted with changing bandages over the next four days … right up to our last day in the field.  It is probably the best memory I have from our time in Australia,” recalled Noggles.

“It was tough to see the injured animals, but the work of the local people who cared for them was extraordinary,” he said. However, many could not be saved. On one ranch the team inquired about injured animals roaming nearby only to learn that nearly 300 sheep would be put down because they were boiled on the hoof.

The common goal of working to protect the land and their inhabitants forged a bond. The American crews usually finished their assigned tasks a couple hours ahead of schedule, so on especially hot days there were water fights between engine crews. Noggle’s tanker had a cab controlled monitor nozzle on the front bumper which may or may not have been instrumental in leading them to victory.

Pal David Soldavini forest service captain on the Lake Tahoe basin management Unit (out of Strawberry) gave weather briefings every morning, and his forecasts were so uncannily accurate the locals dubbed him Jane Bunn — the name of a local television weather forecaster.

In between brutally hot, exhausting work and long shifts, the firefighters were given a couple days off to relax and enjoy local surroundings. “ I fell in love with the beauty of Australia and its people and the wildlife: except the ones who wanted to eat us.”

“Once while patrolling a burn-out, we encountered some Brumbies, and my engine partner suggested we give them apples from our lunch. He offered up the slices, but the horses just tossed their heads, whinnied and pranced about refusing the treat. After several attempts a horse finally sampled one. It threw its head up and down several times while prancing before spitting it out. Another horse took one and did the exact same thing!

“Next morning at that spot on our patrol, we noted that all of the slices were on the ground where they had been dropped. Those horses did not like apples.”

Several hundred cockatoos, laughing kookaburra, magpies, king parrots, and galahs greeted the Americans each morning at dawn. The locals extended a warm welcome, too.                  “The people were very friendly and thankful for our support,” said Noggles.

“There was a true sense of camaraderie with the locals during our assignment. Everyone we came into contact with — from firies to postal workers — remained positive and genuine in spite of the destruction we were battling,” adds Jeremy Stocks, Superintendent of the Ravendale BLM Helitack crew.

“This is the first time the U.S. has sent a boots-on the-ground team to Victoria,” said Noggles. “I think the working relationship between U.S. and Australia firefighters was really strengthened by this combined effort.”

When Noggles worked the Tubbs Fire in 2017, he was charged with supervising a team of 275 firefighters including two men from Melbourne Victoria Australia who assisted Noggles with resource management.

“In the 11 days they worked with me, not only did they assist in completing the task, but they recruited eight more Aussies for help getting county roads open to the public. We could not have accomplished this within the allotted time frame without their aid.”

Noggles worked with one of the Aussies – Stephen Keating —again when they were both assigned to the Hirz/Delta Fire. “In the summer of 2018, I was quite surprised when I got a message from my Aussie buddy saying that he was headed back to the U.S. from Australia along with 150 or so others from Australia, New Zealand and Tasmania,” he recalled.

Also, Keating managed to meet Noggles upon his arrival in Melbourne to brief him on pertinent information regarding equipment and logistics to prepare him for conditions he was walking into.

On the final night in base camp, the local deputy fire management officer thanked the team for their work in the region, acknowledging that their presence allowed her volunteer ‘firies’ to get 30 days of rest after working two months non-stop. She declared that it was the best gift she could have hoped for.

“This experience was extraordinary in many ways,” offered Noggles, “but the most satisfying part was being able to return the support many Aussies, Kiwis and Tassies provided so selflessly to Californians while protecting our state from wildfires during the past few summers.”

Escaped inmate is back in custody; he and girlfriend arrested after ‘stand off’ in Nevada