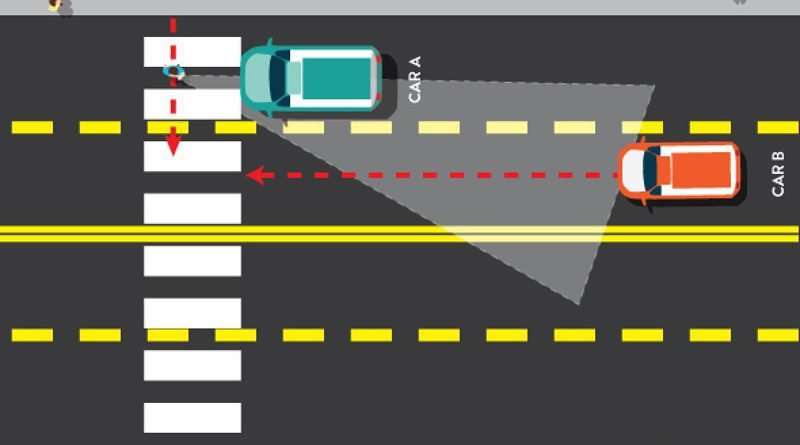 This multiple threats pedestrian-vehicle collision scenario highlights when a motorist in one lane stops for a pedestrian while those in other lanes may or may not. If car A stops for the pedestrian, their vehicle obscures both the pedestrian’s view of car B careening up next to them, and car B’s view of the pedestrian. Photo submitted
News
January 23, 2020January 20, 2020 Jake Hibbitts, Staff Writer

“On a good day, a lot of people don’t see the crosswalks,” said Jerry Askey, resident of Susanville. “Maybe they’re not paying attention, but I think we need to do all we can to make them more visible. And in Chester there’s a light there where we push the button to cross the street. That would be really handy as well.”

During the public comment section of the Lassen Transit Service Agency, Askey spoke to the board about safety issues on Susanville’s Main Street.

He shared his thoughts and suggested redoing all of the city’s Main Street crosswalks to look more like Uptown’s — a design he called a piano-key design. The configuration is more commonly known by the California Department of Transportation as the ladder design.

“They’re much safer. You can see them better,” said Askey pertaining to the piano key design he mentioned. He then proceeded to identify a couple of other locations around Susanville that still use the standard two parallel lines, such as on McDow and Spring streets.

Askey told the board those crosswalks — which were recently finished after the Main Street Capital Preventative Maintenance project — already had ruts where vehicles make contact on the road. He further suggested all of Main Street’s crosswalks adopt the high-visibility crosswalk design.

According to the 2010 Caltrans study on Complete Intersections, one of the design principles of maintaining and improving intersections includes using crosswalk markings that do not fade, and instead, using high-visibility crosswalks such as the ladder design.

With the ladder design, drivers could travel in-between the markings, reducing the wear and tear of the crosswalk.

Conversely, in a study out of the Highway Safety Research Center of the University of North Carolina, titled the Safety Effects of Marked vs. Unmarked Crosswalks at Uncontrolled Locations, unmarked crosswalks can increase in the rate of pedestrian-vehicle crashes if a marked crosswalk has no additional treatment — such as medians, flashing beacons, curb extensions, signage. This is especially true for roadways with four or more lanes, no raised median, and an Average Daily Traffic of greater than 12,000.

The bottom line highlighted in the study found that crosswalk lines should not be used indiscriminately, and an engineering study should be performed before they are installed at uncontrolled locations.

However, Askey’s presence at the LTSA meeting was due to a specific pedestrian-vehicle collision just a few days before.

“We had a fatality here recently. The person wasn’t in the crosswalk, but if they were in the dark that kind of thing may not have been seen anyway,” said Askey.

After the close of the LTSA, the Lassen County Transportation Commission convened, where Mogen took the chance to speak on the subject mentioned earlier.

During Mogen’s report, LCTC vice chairperson and Lassen County Supervisor David Teeter brought back the subject of the crosswalks mentioned by Askey and said, “Is there any way to do pedestrian striping on any areas that we might reconsider?

“I bring that up, because while the fatality accident that we were talking about … wasn’t directly the road’s fault, it sounds like the fact that there’s no pedestrian safety between Mesa Street and the Walmart intersection … that long stretch with no traffic controls at all as far as I can tell, strikes me as unsafe for the pedestrians.”

According to Mogen, a study would need to be conducted in order to determine if a crosswalk should be placed.

Franco replied, “Well, one of the issues is that you have lodging on one side, a convenience store on the other side and some restaurants further down. So they’re crossing there because that’s the quickest way to get across the road. It’s dangerous because it’s not well lighted.”

Teeter interjected asking Mogen, “So my question is, if you did a study and the numbers showed we … had too many crossings, would that occur? Or is that possible with the numbers?”

Mogen told Teeter and the board Caltrans would not remove any crosswalks — even if the numbers showed there were too many in town.

“What they’ll do is … have these cameras that they set out and they basically videotape the intersection for a week and then it counts how many (pedestrians) or bicycles and cars are using that intersection and what movements they’re doing. So it’s really a localized study,” said Mogen. “The existing crosswalks we have … we’re not going to get rid of them.”

Teeter responded that although he isn’t an engineer, he didn’t “need a study to determine that there’s no place for somebody to cross for like a quarter to half a mile there.”

Mogen and Teeter conversed on the topic of those who were already dangerously — and illegally — crossing that particular section of roadway.

Franco contributed another thought to the discussion suggesting another point of risk on the section of roadway, “There’s another factor there, and that is the traffic speeds up as you’re exiting town and the average speed is 35 miles an hour where you have a 30 mile an hour speed limit. That just adds additional risk to that portion of the highway.”

The increase of speed – even just a few miles an hour – does in fact increase the risk.

According to the U.S. Department of Transportation Federal Highway Administration’s Pedestrian Safety Guide and Countermeasure Selection Systems, a pedestrian is twice as likely to be killed at 40 mph than if they were struck by a vehicle at just 30 mph.

It’s just a fact that faster speeds increase the likelihood of a pedestrian being hit and killed.

But what are other ways – besides high-visibility crosswalks – which could be sought to reduce the issue of pedestrian-vehicle collisions? According to the National Cooperative Highway Research Program’s guide for reducing collisions involving pedestrians, it depends on the collision type to select the countermeasure.

Teeter agreed with Franco and added, “Well, that’s because there’s nothing to cool the traffic between Mesa and Walmart. No features in the roadway. There’s no design at all to slow traffic down between there because … Caltrans has no interest in designing that. They want traffic to move from point A to point B . That’s their number one thing you’re graded on.”

Teeter mentioned that it wasn’t solely Caltrans’s fault, “because what happened in these chambers last year, is our community rejected pedestrian safety.”

Steve Borroum, LCTC acting engineer, mentioned one of the things not present between the Mesa to Walmart stretch was good lighting.

As part of the study being conducted on Highway 36, Borroum said, “We did an examination of pedestrian accidents. There’s not anything that jumps out at you as ‘yeah, we’ve got to do this,’ but there’s clearly pedestrian accidents and we need to try to enhance our overall effort.”

Borroum said the study is poised for completion in a couple of months.

Franco then mentioned an additional complication with pedestrian-vehicle collisions.

“Another thing that adds to the risk is I believe there’s a left-hand turn lane in the middle … and if somebody gets in that lane, they’re not looking for pedestrians,” said Franco who mentioned he had seen some close calls in his experience.

This is known as a Multiple Threats collision type, where the pedestrian crosses in front of a stopped vehicle in one lane of a multi-lane road, and is subsequently struck by a vehicle in an adjacent lane.

Advance yield/stop line includes the stop bar or “sharks teeth” yield markings (as many locations on Susanville’s Main have) placed 20 to 50 feet in advance of a marked crosswalk to indicate where a vehicle must stop or yield.

This countermeasure discourages drivers from stopping too close to crosswalks and blocking other drivers’ views of pedestrians and pedestrians’ views of vehicles. Pedestrians can see if a vehicle is stopping or not stopping and can take evasive action.

However, if a pedestrian fails to use a crosswalk when attempting to cross a road in the state of California, the pedestrian may be at fault for any accident. In the California Driver’s Handbook it says to never assume other drivers will give you the right-of-way. A vehicle must not pass another vehicle stopped at a crosswalk, because a pedestrian you cannot see may be crossing the street. Stop and proceed when all pedestrians have crossed the street.

So as long as a pedestrian is crossing a marked crosswalk or crossing at an intersection that may or may not have a marked crosswalk, they have right-of-way. However, another part of this same vehicle code states, “No pedestrian may suddenly leave a curb or other place of safety and walk or run into the path of a vehicle that is so close as to constitute an immediate hazard.”

Furthermore, pedestrians are not legally allowed to walk out into the street without a crosswalk. CVC 21954(a) states, “Every pedestrian upon a roadway at any point other than within a marked crosswalk or within an unmarked crosswalk at an intersection shall yield the right-of-way to all vehicles upon the roadway so near as to constitute an immediate hazard.”

This states pedestrians do not always have right-of-way. Pedestrians yield right-of-way to vehicles when they cross in an area outside of a crosswalk.

However, it’s important to note that drivers are not completely blameless in these accidents.

The same section later reads, “the provisions of this section shall not relieve the driver of a vehicle from the duty to exercise due care for the safety of any pedestrian upon a roadway.”

This means that if a pedestrian does cross a street illegally and a driver has enough time and notice to slow down or stop, they must do so.