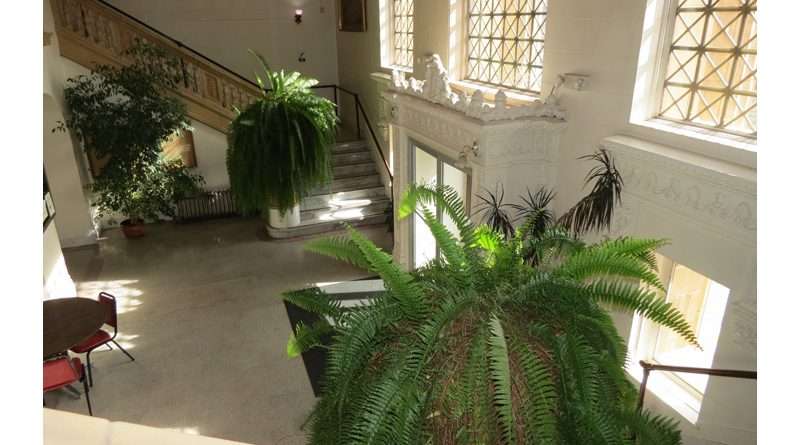 Two giant ferns welcome visitors to the Lassen County Historic Courthouse, and staff is looking for a temporary home for them during the upcoming renovation project. Lassen County Administrative Officer Richard Egan noted the county might have the historic building vacated by employees by the end of this calendar year in order to start renovating the building, but the county is looking for someone to take care of the large plants. The ferns, which Egan said have been there “For as long as anyone can remember,” are an important piece of history the county is hoping to ensure has a smooth transition during the renovation project. “We’re going to be very careful with them,” stressed Egan. Photos by Makenzie Davis
News
April 7, 2019April 1, 2019 Makenzie Davis, News Editor

The Historic Lassen County Courthouse is ready for an upgrade, as many of those who work in the stone building know — from the sometimes uncontrollable temperatures and outdated infrastructure — and the county is working on a plan to use funding acquired from the state to preserve the notable building and make use of what it could offer.

Last summer, with a push from Assemblyman Brian Dahle, the county was notified it would receive about $8.45 million through legislative specified funding through the California Natural Resources Agency.

With these funds, which can only be spent on the courthouse remodel, the county is planning a five-step phasing plan to ensure it can get the most out of the allotted money and projects the courthouse’s portion of the work may be done around 2023.

According to County Administrative Officer Richard Egan, during the Tuesday, March 26, Lassen County Board of Supervisors meeting, there are many areas in the courthouse needing attention, including the outdated heating system, which often prompts the phrase, “100 degrees in the summer and 100 degrees in the winter,” with its lack of thermostat regulation, and the roughly 30 window air conditioning units.

Other areas most likely requiring attention will be ensuring the building meets seismic regulations (however, the county is working to minimize that requirement where it can to save money and maintain historic areas,) bringing the building to ADA

requirements, including possibly adding an elevator, and clearing up some of the “100 years of hoarding” of some records and items, as Egan put it.

The objective of the courthouse renovation project, summarized in one sentence, reads, “preserving the courthouse’s structural integrity and historic significance, while also providing essential life-safety and accessibility to better accommodate visitors and employees.”

One of the goals is to utilize all of the space the courthouse has to offer while maintaining its historic qualities, with Egan noting he would like to see the departments from the 707 Nevada St. building move to the courthouse, including the supervisors chambers to the old courtroom, which actually received its last renovation in the 1990s.

The county hopes to have the building vacated by the end of this calendar year with the bidding for the initial demolition by early 2020.

Phase 0 — The first phase, which is actually phase 0, will be moving everyone out of the Historic Courthouse to temporary offices. The Assessor is projected to temporarily move to the 107 S. Roop St. building, the treasurer/ tax collector and the board clerk and the recorder and elections office is slated to move to the nearby annex, the

treasurer/ tax collector office of recovery and reimbursement will go to 2950 Riverside St. building and public works will go to 707 Nevada St.

There will also be items temporarily stored at various county buildings, and the surplus property, mainly any furniture or books, like law books, that don’t have any use or historical significance, will be put up for sale, and historic items will be identified and stored.

The county will also identify any hazardous material, complete the due diligence report, relocate technological items and maintain records.

Phase 1 — Next will be the actual renovation of the courthouse. The county will first work with professional services, including architects and engineers, prepare the plans, remove any hazardous material (Egan noted the building may have been built before the common hazardous material were used) and then demolition of the interior will begin.

After the initial demolition, the county will see where seismic work will need to be completed and any structural improvements required. After that, the county will work on the “backbone utilities” including electrical upgrades, (currently there are some exposed wires and pipes in the building), the HVAC systems and ADA upgrades, including an elevator or lift, life safety and energy efficient upgrades like windows.

The county will then look at the restoration of the historic courtroom, hallways and entry, maintaining the historical integrity of the original work.

The county will also look at completing the exterior ADA improvements and parking, while conducting a rough finish of the basement and attic.

Phase 2 — Once all the work is done in the building, the county will work to reinstall the wiring, furniture, fixtures, equipment and files and repopulate various departments back into the courthouse.

They also hope to hold the first supervisors meeting in the old courtroom.

Phase 3 — With funding leftover, if there is any, the county hopes to renovate the annex building, located at 221 S. Roop Street.

Phase 4 — Again, if there is leftover funding, the county will look into renovating the historical jail and grounds, with examples being a decorative fencing around the jail and the restoration of retaining walls.

How will funding be split up?

It was said several times during the March 26 meeting that the provided $8.45 million might not go as far as it seems.

Time for an upgrade, especially for one former supervisor

Former Lassen County Supervisor Jim Chapman is eager for this project, as it’s one he pushed for many years.

“I think it’s going to be exciting,” said Chapman

His main advice to the county is to not skimp on what they can do, especially the walls, which are made up of wire, some kind of plaster and a fiber (which might be something like horsehair or hemp).

He noted the work needs to be done correctly in order for the celebrated building to remain another century.

Much is still unknown

Only time will be able to tell how far the grant will take the county, with seismic and ADA expected to take a huge chunk; however, the matter will be brought back before the board many more times, Egan said, and the project moves forward.

The supervisors and county staff also noted this was a community project and was going to be holding meetings and seeking community input for the upcoming project.

Keep the history, make it safe

Overall, more than a century later, the historic courthouse may no longer serve as the main court for the county, but staff is working to utilize the funds provided by the state to maintain the historic integrity of the building, while ensuring the comfort and safety for all who work there and visit for many years to come.