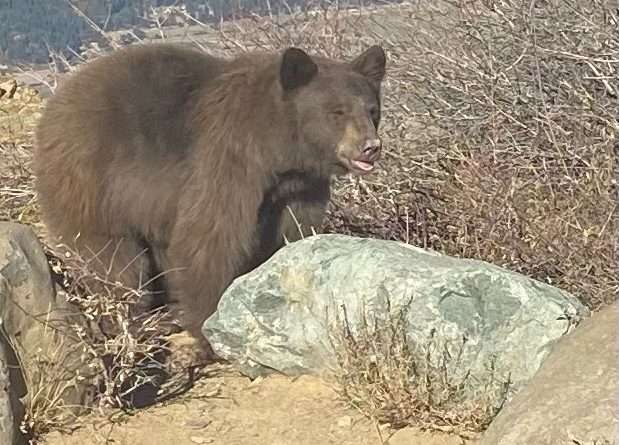 As mentioned in a previous post, I recently had a very close encounter with a medium-sized adult bear weighing 250 to 300 lbs. at the summit of Mt. Hough. But my previous report left out many important details, and especially about the lengthy conversation I shared with the Bear, my new friend, and fellow Dixie Fire refugee

The Bear and I spent approximately 15 minutes in each other’s presence, sometimes 10 feet apart, or less. Our conversation came to an end only when the Bear, in a gesture of friendship, began to slowly move towards me and around the rock which stood between us. As its paws appeared from behind the rock, my eyes quickly focused on its long, sharp claws. Wisely, I decided it was best to not trust the instincts of a hungry and frightened wild animal, and so I asked the Bear to leave, which it did most quickly.

Now there are those who would question my ability to have such a conversation with the Bear.  But professional linguists report that there is often more non-verbal communication between humans than what is communicated through words.  Body language, eye contact, facial movements, tone of voice, posture, and more reveal much about what we humans communicate to each other.  From this perspective, the Bear and I did have a lengthy and intense exchange of emotions, needs, feelings and fears.

Both myself and the Bear expressed concern for our survival.  The Bear was focused on physical survival, with its need for food and water most important.  My focus was on the survival of my community, Greenville & Plumas County, and the long-term survival of my human species on planet Earth.  It was saddening to tell the Bear that no, I could not share any food.  It would have been so easy to reach inside the pack inside my car and share some of the many  Nutri-Grain bars which we Greenville refugees have come to identify as a separate food group.  But doing so would have created expectations for my Bear friend which would someday lead to a very unhappy ending. I respectfully declined.

The still vibrant power of America and our “economic miracle” remains capable of rushing physical aid to me in many forms, so I was not in need of food, shelter, or transportation.  Despite having a near 100 percent loss from the Dixie Fire, I am now, in many ways, capable of resuming a modern American lifestyle.  Not so for my Bear friend, whose world has completely changed.

Both the Bear and myself desperately wished to “go back home,” but neither of us had a home to go to.  Yes, I had a warm and secure place to sleep in a small apartment in East Quincy, but this is not home to me. Yes, the Bear could wander to another nearby unburned forest area, but this is not where the Bear called home. Plus, there are probably several other bears which have already moved into such terrain which did survive, and it is a simple fact that a small patch of unburned forest cannot support very many hungry bears.

The deepest bond which my Bear friend and I shared is a feeling of loneliness.  I am lonely for the beautiful home, and businesses, and funky community which I lost. The Bear was lonely for everything … its food, its traditional winter den, the company of fellow animals, the sound of the wind in the trees.  Our loneliness together was so deep that words would have interrupted the stream of conscious communication between us.   This Bear’s sad and tired eyes said everything needed, everything possible.

It was at the moment when our feelings of shared loneliness were most intense that the Bear made a small gesture to move towards me and around the small rock which separated us.  I know that despite all of its instincts to never trust any human, this Bear decided to trust me as a possible friend.  Oh, that I could have put aside my own fears for the unpredictable instincts of  this completely wild being.  I only recently lost Prince, my much loved 130-pound St. Bernard, and I would have so loved to wrap my arms around my Bear friend as I so often did with Prince.  As if to confirm my fear of possible unpredictable behavior, the Bear immediately turned and ran upon my making the slightest gesture of standing tall.  Truly the Bear feared me, more than I feared the Bear.  My only solace is that the Bear did follow my advice and headed downslope towards the cool waters of Crystal Lake.

My Bear friend, and all of the voices of Nature then around me, imparted a most severe warning.  Despite our great intelligence, and the many complex technologies we humans have created to circumvent Nature, none of us humans are safe from being completely vulnerable before Nature.  The desperate situation faced by this Bear could soon happen to any, and to all of us.  This Bear hopes we will wake up and begs us to put aside our callous attitudes of being superior to Nature.  This Bear knows many simple truths which many otherwise intelligent humans cannot comprehend.  Life on planet Earth is fragile, and the delicate balances of Nature must be respected, or the disasters we have recently experienced will soon grow many times more frequent and intense.

I must confess that this conversation with my new Fire Refugee Bear friend benefited from recent experiences where a younger native Maidu friend taught me how to talk with birds and animals.  No, I did not attend lectures for “Bear Talk 101”.  I simply watched my friend communicate with the animals around him, and eventually began to do the same.   This Bear made many sounds, and each sound was filled with agony and emotion.   I responded with many sounds, hoping to express calmness, and sympathy.   I believe the Bear understood me and is the reason it chose to put aside its fears, and approach me as a friend.

Both the Bear, and my Maidu friend, taught me about the need to slow down. Our modern world, even in Plumas County, travels way too fast for the rhythms of nature.   To talk with wild animals, we must slow down, slow way down.  After slowing down, we can open all of our senses.  Speed forces us to pull back many of our senses, but once we are slow, very slow, our senses can open to their full capacity.  With our breath and heart slowed, and our senses fully open, having a conversation with Nature, and wild animals, is not difficult.   Doing so feels natural, because at such a slow speed, we have returned to being a part of Nature.

Every force of Nature and man which created the Dixie Fire, and which led to both me and the Bear becoming refugees, originates from mankind’s addiction to speed and our desires to dominate Nature.  We of the modern world expect to travel quickly, grow quickly, consume voraciously, and procreate wildly.  We extract the wealth of Mother Nature without plans for future generations of humans or animals, and we interpret the slow response of Mother Nature to our transgressions as acceptance for our unsustainable actions.  Nature may be slow to respond, but once so awakened, Nature, as we have so recently witnessed, can quickly bring death and destruction on a “biblical scale.”

If we humans are to survive as a species on this planet, we must learn to slow down.  We must learn to live within the limitations of Nature.  We mut embrace cooperation, and cease using competition, conflict, and consumption as our primary measures of success    We must somehow trade the orgiastic impulses of speed, growth, possessions, and illusion for the more substantial gifts of good food, clean air & water, healthy communities, and loving families.   The Dixie Fire took many such substantial gifts from me, and took even more from my fellow refugee friend, the Bear.  In a thousand years, it is very possible that mankind will have consumed itself into non-existence on planet earth, but I am confident that the descendants of my new friend, the Bear, will still roam these mountains and forests.