Election fraud is always a concern – but especially in 2020. Why? Democrats are pushing “universal mail-in ballots,” saying COVID-19 discourages in-person voting. Truth is universal mail-in voting is a greater threat to election integrity.

Let us start with basics. Absentee ballots are available on request – so anyone who feels they need one can get one. Meantime, Democrats are selling more panic, knowing mail-in irregularities will either benefit their candidates or cast doubt on a Trump win.

Empirically, mail-in ballots present a host of problems – problems not found when voters cast their ballots in person. While marginal in most elections, taken to a national level, they would promptly undermine public trust, integrity in the process and legitimacy of outcomes. That is why universal mail-in voting is a non-starter.

Historically, election irregularities jump with mail-in ballots. Reasons are obvious. First, voter identity is often suspect or uncheckable. Forgery is virtually impossible to detect. Second, like confirming a will-writer’s capacity, the voter’s state of mind is hard to find. Was the vote cast with over-the-shoulder direction, adverse influences, coerced, bought? No way to know.

Third, while electioneering bans around polling places keep campaign staff, heavy-handed volunteers, unlawful assistance, and subtle intimidation at bay, they do not work at home.

Fifth, the process of counting votes, transcribing from ballot to tally is fraught with risk – chances for error, negligence, recklessness (moving too fast), or intentional intrusion. Sixth, the biggest part of election integrity is assuring access and accuracy. But another part is speedy returns. Universal mail-in ballots – even miraculously devoid of irregularities – would take weeks to count. Those would be – as the tight 2000 race showed – tense, untrusting weeks. They would undermine trust in the outcome.

Data reinforces logic – and the importance of avoiding chaos from “universal mail-in” voting. While valid reasons support self-requested absentee ballots, from travel and disability to illness and allowance for life’s exigencies, “universal mail-in” is a different animal.

As deep-dive studies show, the notion of “changing the U.S. election system to no-fault absentee balloting, in which anyone can vote with a mail-in ballot without a reason, or to mail-only elections, in which voters no longer have the ability to vote in person, is an unwise and dangerous policy,” one that “would disenfranchise voters and make fraud far easier.” See, amac.us/four-stolen-elections-the-vulnerabilities-of-absentee-and-mail-in-ballots/?campaign=daily-news-email.

More to the point, history shows fraud jumps with mail-in voting, plain and simple. “Mail-in ballots are susceptible to being stolen, altered, forged, and forced,” so much so that a 1998 Florida report found absence of “in-person, at-the-polls” accountability … “makes absentee ballots the ‘tool of choice’ for those inclined to commit voter fraud.” In short, mail-in invites fraud.

Another proof is the tendency of fraud tied to “vote harvesting,” where a “third party” gathers up absentee ballots for election officials. Protections are hard to implement, opening the door to fraud. Moreover, “harvesters” are sometimes paid by campaigns to collect ballots. What could go wrong there?

If mail-in ballots facilitate errors in voting, transit, collection, and tallying, they also incentivize illegal vote buying and make it easier, since the vote buyer can see the vote cast. New Jersey, for example, has seen convictions for orchestrated, widespread schemes to target and buy votes of low-income voters.

Question: In a time when individuals are unemployed, getting evicted, businesses straining, Congress arguing over more unemployment benefits, student loans paused – what are chances some campaigns would try to target and buy votes? Probably better than even.

So, while adequate provisions should be made for safe in-person voting, with on-request absentee ballots, Democrats are all-in for universal mail-in. Latest sign is an “emergency” House vote to ramp up Post Office funding – to support sending and getting back 150 million ballots. If some elections are decided by single digits, can you imagine the chances of error and fraud? Odds of election miscarriage are staggering.

Nevertheless, with something in mind, Democrat House Speaker Pelosi last week declared: “Alarmingly, across the nation, we see the devastating effects of the President’s campaign to sabotage the election by manipulating the Postal Service to disenfranchise voters” – presumably by not allowing mass fraud and error.

To strong-arm “universal mail-in” voting, Pelosi impugned Postal Service leadership integrity. She said they aim to “degrade postal service, delay the mail, and … deny the ability of eligible Americans to cast their votes through the mail in the upcoming elections in a timely fashion.”

In a word, nonsense. Most of the nation will be able to safely vote in person. For those who cannot, absentee ballots exist – as they always have. Election fraud is always a concern – especially in 2020. Why? Because … the sniff of it is in the air.

Robert Charles is a former assistant secretary of state for President George W. Bush, former naval intelligence officer and litigator. He served in the Reagan and Bush 41 White Houses, as congressional counsel for five years, and wrote “Narcotics and Terrorism” (2003) and “Eagles and Evergreens” (2018), the latter on WWII vets in a Maine town.

As a GenZ authority and policy advocate, I believe it is essential to advance a cross-generational understanding of the driving…

Congressman Doug LaMalfa voted in support of H.R. 346, the NOTAM Improvement Act of 2023, to enhance aviation safety by… 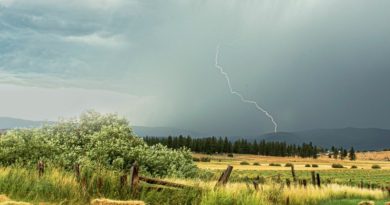 After receiving more than 200 entries, Plumas Bank announced the winners of its Community Pride photo contest. The winners who…

Following an early morning briefing, our Point-in-Time survey teams departed to their assigned areas to gather information from individuals who…