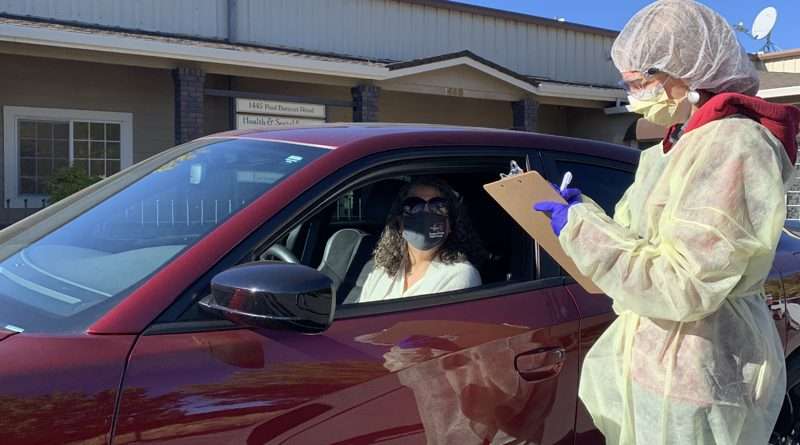 Lassen County Public Health Director Cynthia Raschein goes through the drive through COVID-19 testing clinic and is checked in by Program Coordinator Jena Roof. The local testing team has ranked among the top three in the state thanks to their availability to test and the testing per capita. Photos by Makenzie Davis
News
October 22, 2020August 19, 2021 Makenzie Davis, [email protected] COVID-19, Lassen County, Public Health, Testing

It was about 100 degrees outside and Lassen County Public Health Lead Nurse Helen May was dressed in full personal protective equipment testing staff at a local prison during an outbreak.

Despite the heat, May completed 107 COVID-19 tests in the span of an hour and a half — what’s touted as a record at the local department.

“I literally could not write fast enough,” said Maryann Kiar, emergency preparedness program assistant at public health, on filling out the forms during the testing.

When the pandemic struck, confusion set in around the country, but through the dedication and collaboration of the local public health team and partnering agencies, they’ve shown they can get the job done — the local testing crew even remains ranked among the state’s top three testing teams. For a while, they topped the chart.

By being available to test and the tests done per capita, the local crew shines, and it’s a testament to how well agencies in the area work together to get the job done.

The testing task force includes public health, the LCC nursing program, which conducted the appropriate training to those who administer the test, SEMSA, Janesville Fire Department, Susan River Fire Department, the Lassen County Sheriff’s Office and the Susanville Police Department, and many more have assisted during the pandemic.

“If we weren’t working that well together, supporting each other, we wouldn’t be in the top,” Kiar added.

During the peak of the pandemic, there were eight employees in public health, now there are 16, but since the beginning, there have been many departments, organizations and institutions that have lent their resources, time and efforts.

Literally — since the beginning, other departments and organizations have been lending a hand ensuring tests are properly done and delivered.

When Lassen County tested its first patient, the commercial delivery truck intended to transport the sample to a lab never showed up. With the patient waiting for the results, the county social services department stepped up and sent a driver to deliver the test instead. They continue to help too, with social services transportation making deliveries daily to Redding or San Francisco.

According to Public Health Director Cynthia Raschein, staying near the top testing teams in California keeps Lassen County from being in those more restrictive Purple and Red tiers in the state’s Blueprint for a Safer Economy, and it allows for the community to avoid shutting down.

“By being able to show a big testing number, we can show it’s not widespread (in our community),” said Raschein.

When the pandemic started and everything was being shut down, the local team went hard at securing tests, and despite some trials, they succeeded, especially with help from Patti Carter, the regional disaster medical health coordinator.

Jim Uruburu, emergency preparedness program coordinator, said the team acted quickly making sure the area had what it needed.

“We went after it really hard and went full throttle,” Uruburu said. “We decided we were just going to go Lassen Strong and make it all happen.”

By late May, Lassen County had secured a large amount of tests and the first mass testing event was held at Lassen Community College.

Since then, public health started offering drive through testing at the public health parking lot on Paul Bunyan Road. Now, testing slots are available every Tuesday and Wednesday from 9 a.m. to Noon. Anyone wanting a test can register online, or just show up during a testing event.

“We’ve never turned anyone away on a testing day,” said Uruburu.

And testing is not just for those who are symptomatic for COVID-19 — it’s open to anyone.

Uruburu said the testing can help with the mental health of area residents by assuring them they don’t have the virus, since some who are infected can remain asymptomatic.

The testing task force also audits the testing done at the local prisons, they’ve tested the migrant farm workers who came to the area to work and they also helped ensure the fire camps had access to tests should they need it when crews camped at the fairgrounds.

While the pandemic has hurt some local businesses and disrupted the normal way of life for many around the world, a positive is the increased communication and collaboration between different agencies in the county.

“It’s amazing teamwork across the board,” said Raschein.

If there are a few things she hopes continues when the pandemic is done, it’s the continued partnerships the public health department has gained and the continued support for supporting local businesses.

The center of all of this is the community, Kiar added. “It’s always our main focus.”

“The more your do your part, the easier it makes it for us to do ours to keep our community going,” said Raschein.

Visit lassencares.org to schedule a test online, or for assistance call the COVID-19 call center at 251-8100.