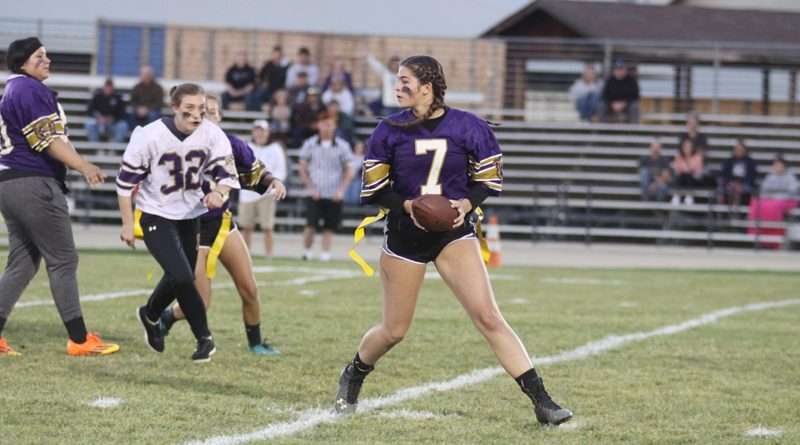 The annual Grizzly tradition of a powder puff football game held on the week of Homecoming was carried out Wednesday, Oct. 4 on the Arnold Field at Lassen High. With the freshmen/senior team donning purple jerseys and the sophomore/junior team in white, fans picked their poison and faithfully rooted for their team from start to finish.

The white team ultimately stole the victory with a final score of 14-8.

In addition to the two female teams on the field, the game also saw the many talents of the all-male cheerleading team both on the sidelines while the ladies played and in the middle of the field for the halftime performance. This year’s cheer squad included Chase Rose, Devinn Salinthone, Dillon Ross, Elijah Morales, Jesse-Ray Morring, Rannon Nicholas, Triston Ingwerson and Will Ashmore.

Lainey Nevis caused the first uproar of the evening when she rushed 25 yards to bring the line of scrimmage from the white 35-yard line to purple’s 40. Next play for the white team was a pass by Anderson that was completed by Brown at the 23-yard line in purple territory.

The purple team then took over on downs after Cluck pulls Anderson’s flag and sends the offensive white players back to the sideline.

Dani Nevis undid practically all of the white team’s hard work with a single play in which she rushed from the purple 23-yard line to the white 45-yard line. After the snap at the white 45, Nicholas attempted to gain yardage for the purple team; however, after two attempts foiled, the second of which was caused by Lainey Nevis pulling one of Nicholas’ flags, the white team took over downs on their own 45-yard line.

After gaining offensive possession, the white team called a timeout with 8:14 remaining of the half.

Monahan on the carry received the first flag of the evening. According to announcer Paul Moore, fans saw “something new to football with an eight-yard penalty.” From there, the purple team started their first in ten at their 28-yard line. After the next snap, Steele threw a strong pass down field. The pass was completed by Dani Nevis at the white 44-yard line.

Some hesitation from the purple team after the next snap cost them the offensive lead as Stevens sacked Nicholas and caused the sophomore/ junior fans to erupt with cheers.

A purple timeout called with 1:32 remaining of the half put the game on hold with a 0-0 tie on the board.

Despite the great sac seen from white team player Stevens, anxiety seemed to rise from the white team coaches. Moore commented, “Tucker St. Andre is showing a lack of discipline throwing his clipboard on the field.”

Once the timeout was finished, white took over on downs while on their own 45-yard line. Almost instantly after the clock began, Richmond rushed 58-yards for the first touchdown of the evening.

Once again, Moore commented that the game brought “something new to football, as neither side is taking an interest at the point after touchdown.” Both sides remained on the sideline in a huddle until Moore’s comment reminded them of the importance of a PAT.

As the white team attempted the post-touchdown field goal, purple player Miller did her defensive duty and prevented the goal. Unfortunately, it came at the cost of self-injury as the ball hit her. Luckily, Moore reassured the crowd that there was no concussion suffered on the field.

The white team kicked off to the purple yet again. This time, the ball was caught by Dani Nevis who immediately took a knee at the purple 30-yard line. Upon the first snap, Nicholas threw the ball and the pass was completed by Dani Nevis. Dani then took off running and sprinted the 47 yards until she found herself in the white end zone for a purple touchdown.

After an unsuccessful PAT attempt, purple was set to kick off.

White player Wallace caught the ball after the kickoff and carried it across mid-field before her sprint was put to a stop. With the line of scrimmage barely on the purple side of the field, Anderson decided to pass after the snap. The pass intended for Harr was incomplete, and the first half had officially run out of time.

While the ladies were focused on hydrating and keeping their heads in the game, and the coaches were focused on new strategies to secure a win, the audience was more than entertained with a brilliant performance from the male cheerleaders that included a dance and a few stunts.

With a 6-6 tie still on the board, both teams walked on the field to get the game started again, right where they left off. The white team took their places offensively, and after the snap, Anderson handed the ball off to Stevens who sprinted a total of 70 yards for another touchdown.

After the touchdown, Stevens was then set to kick the field goal. Despite the fatigue that must have struck her from the sprint, Stevens showed no sign of slowing down. She kicked a good PAT and thus earned the sophomore/junior team an additional two points. The exact reason why they gained two points rather than the traditional single remains unknown, much to the purple team’s dismay.

In an attempt to keep the purple fans entertained after the second white touchdown, the cheerleaders brought something new to football by actively tackling the mascot while on the sideline.

Back to the game, the white team kicked off to purple, and upon catching the ball Dani Nevis sprinted up the field until she was stopped at the purple 45-yard line.

Four downs later, the white team was back in offensive possession. However, despite their previous success, the white offense couldn’t overcome the purple defense. As the yards needed increased from 15 to 18 to 20, Moore commented, “The senior/ freshman team is going in the wrong direction.”

With the score of 14-6, white, still on the board, the cheerleaders decided to abandon their loyalty to the freshman/ senior team and sprinted around the track to give the sophomore/ junior team their full support. The mascot, still recovering from the full-on tackle, remained on the purple side of the field.Upon regaining possession, the purple team sent Steele out on the field to gain 18 yards and push the white defense closer and closer to their own end zone. At the next snap, Muesch broke loose from the wall of white defenders and entered the white end zone to score the second touchdown for the purple team; prior to making it all the way, however, penalty flags were thrown to declare the touchdown no good.

At this point, the white coaches found themselves unable to keep off of the field and clipboards again found themselves flying through the air. Prior to penalizing the white team for their overly engaged coaches, Moore announced the friendly reminder, “Hobble off Tucker, hobble off.”

Purple player Clements sacked the white quarterback and brought life back into the freshmen/ senior crowd. After the sac, the white team knew their options were limited. After the next snap, Anderson punts the ball until it lands on the white 43-yard line, thus turning over downs to the purple team.

In the first down, Nicholas rushes to the white 37-yard line for a first down before being stopped by Lainey Nevis. Dani Nevis then took the ball to the white 18-yard line to earn another first down for the purple team. Then, it was Monahan’s turn with the ball as she rushed to the six-yard line and stared into the eyes of a panicked set of white players.

A purple timeout was called after a purple fumble threw the freshmen/ seniors off of their groove. With 1:52 on the clock, there was just enough time to score a touchdown, land a good PAT and tie the game.

After settling on a clear plan of success, the purple team retook their positions on the field and waited for the snap. Upon the snap, Nicholas attempted to rush the final six yards for a touchdown, but white player Brown stole a flag from Nicholas before the deed was done.

Purple turned over downs to white and only showed signs of slight frustration.

Upon the first down for the white team, the purple defensive line let loose. The purple team scored a safety with 1:05 on the clock. With that, the score jumped to 14-8, white, where it would remain for the rest of the game.

Penalties thrown left and right and a personal foul against the white team, as the coaches couldn’t stay off the field, caused the clock to dwindle into the final seconds of the game.

The sophomore/ junior team erupted in a huge mass of cheers as they accepted the victory and promised another great game for next year’s Homecoming week.