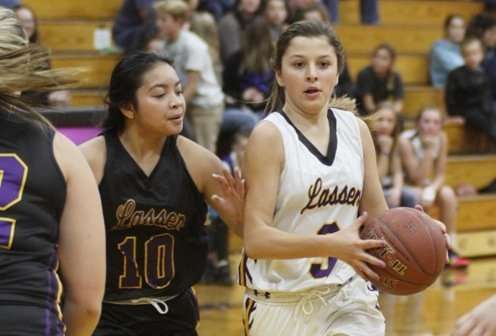 The madness included three games with the freshmen, junior varsity and varsity teams scrimmaging amongst their fellow teammates to give loyal fans a preview of the 2017-2018 season.

In addition to the games, the event had quite a few raffle prizes and many auction items that allowed the Grizzly girls to raise funds for the season and leave guests satisfied with their prizes.

The girls worked hard on the court and approached the final minute of the game with a 16-16 tie thanks to a good shot by purple team member Parady.

However, as the clock reached its final five seconds, a basket by Hampton won the game for the white team with a score of 18-16.

The junior varsity girls truly stepped it up on the court with a score of 8-1, purple team, by the time the first half had four minutes remaining.

The score reached 12-3, purple, by the end of the half, but the game was far from over.

During the halftime break of the junior varsity game, the Lassen Youth Cheerleaders showed off their stunting and dance skills.

The young cheerleaders were followed by the Lassen High Drill team, who shimmied and danced their way across the court to give fans a preview of the upcoming basketball performances.

In the second half of the junior varsity game, the white team burst from the gate kicking and ended up gaining nine points in the span of 10 minutes.

Finally, it was time for the varsity girls to storm the court.

Making up the purple team was Wallace, Anderson, Steele, Hampton and Larson. On the white was Lainey Nevis, Packard, Stewart, Downs and Struthers.

First to score was Wallace with a three-pointer at 8:51. Hampton followed less than 30 seconds later with a layup that brought the score to 5-0, purple, without a sweat.

The white team found itself on the board after a layup by Stewart sparked cheers from the student section of the crowd.

After Stewart’s layup, the fouls started on the court.

Steele was first to position herself at the top of the key with two good free throws at 6:29. Hampton was next to take position and scored another two free throws to bring the score to 8-2, purple.

White’s next indent in the score came at the hands of Downs, who hit a layup with 3:42 remaining of the half.

With another three baskets scored by Hampton, Anderson and Steele at 2:56, 2:13 and 0:23, respectively, the half was called to an end with 14-4 on the board, favoring the purple team.

The Grizzly girls started the second half with just as much passion as the first.

Becky Struthers put the white team back in the running with a basket at 8:22, but Hampton countered with a three-pointer at 8:07.

White wasn’t willing to give up without a fight, though. Stewart scored a basket on Downs’ rebound with 7:36 on the clock. She then scored another basket at 6:31, and on her own rebound, she scored a third one minute later.

After Stewart single-handedly brought the white team up by six points, Wallace broke the streak with a three-pointer for team purple.

Becky Struthers was on top of her game with a basket at 3:33, and Stewart followed moments later with a basket to bring the score to 19-16, purple.

Feeling anxious about how quickly white was catching up, purple player Anderson was quick to keep purple ahead with a three-pointer at 2:31.

Memmott, a junior varsity player who joined the white team due to lack of varsity players, scored a three-pointer with 2:047 on the board to negate Anderson’s recent achievement.

With the score at 22-19, purple was in trouble, and they certainly knew it.

The purple team joined together for a great display of teamwork. Larson scored two baskets in the final two minutes of the game with one basket by Hampton sandwiched in between.

With one second left of the game, Stewart made a final attempt to grant victory for the white team with a layup.

The final score was 29-21, favoring the purple team.

With the girls officially warmed up for the season and the fans sufficiently pleased with the hard work seen on the court, the Lady Grizzlies are more than ready to take on any team who stands in their way.