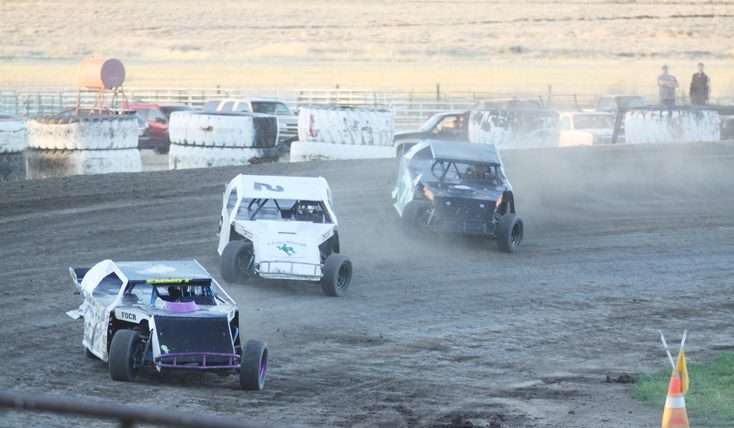 The Diamond Mountain Speedway results are in from the Saturday, July 8 races, and with heat races, main events and trophy dashes, many drivers left the track as winners.

Mini stock racer Billy Gibson shared some insight as to the life of a racer after the mini stock heat races had finished.

Gibson has been behind the wheel for three years and has raced on the track in Quincy, California and the local Diamond Mountain Speedway track in Susanville.

While he is now an established racer on the track with his easily recognized vehicle sporting the number 121, Gibson didn’t start on the speedway until after seeing his son-in-law, Joe Blackwell, and grandson, Jeff Olschowka, take on the track.

After being inspired by family members, Gibson gave it a go with his first season in 2014.

However, while his mind was ready to take on the need for speed, Gibson’s body had other plans.

During his first time racing in Susanville, Gibson suffered from cardiac arrest.

“I actually died,” he said, recalling the incident.

“The paramedics revived me there,” Gibson said. He was then taken to the emergency room and was later flown to Reno.

The setback wasn’t going to get in Gibson’s way. He later continued, “I spent about three weeks (in Reno), but I’m back racing now.”

Gibson said he knew the heart attack would have happened regardless of where he was or what he was doing, so there was no use in letting it scare him away from racing.

In the seasons since the unfortunate introduction to racing, Gibson has done very well in mini stock races.

He repeated the success in 2016, and in addition to his second third-place finish in Quincy, Gibson went on to finish second of mini stock overall in Susanville.

When asked about his goals for the 2017 season, Gibson expressed that he just wants to finish the season and have fun.

The results from the July 8 races are as followed: