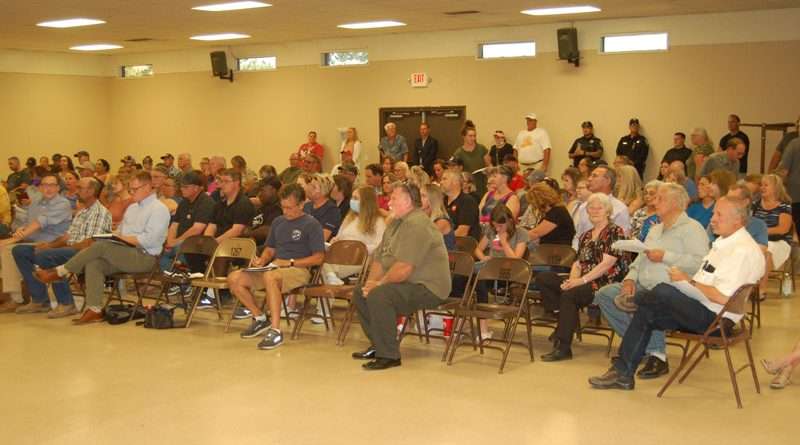 Although it was billed at a Town Hall Meeting, only written questions were allowed at the conclusion of the 70-minute meeting.

Bridges opened the meeting and noted a report on the economic impact of the closure of CCC noted the county stands to lose $120 million if the state facility closes.

He said the closure would affect “everybody who lives here.”

He also announced the Aug. 2 closure of A Yard at CCC has been confirmed, raising safety concerns due to availability of inmate firefighters as we enter this year’s wildfire season.

Dana Simas, press secretary for CDCR, did not directly address the closure of A Yard, but she did respond to lassennews’ questions via email.

“Due to the deactivation of CCC, we will be incrementally deactivating facilities within the institution. There are no early releases of incarcerated people at CCC due to the deactivation. CDCR is working on a case-by-case basis to place each incarcerated individual in an appropriate prison to meet their rehabilitative and custody needs. All credits earned for self-help, educational and vocational programs at a closing institution will transfer with the individual. Individuals will have the opportunity to finish courses in progress.”

Schuster expressed her desire to keep CCC open because its employs amount to about 25 percent of the city’s workforce. She noted the city has had a great relationship with CCC since construction was completed in 1963.

She said the city attorney was working on the possibility of filing an injunction to try to stop the closure of the prison and lamented the state’s lack of transparency in responding the city’s requests for information.

Newton also blasted the state for its feeble response to the county’s repeated Freedom of Information Act requests.

He said so far the county hasn’t received “anything meaningful” in response to county requests for information, and the closure of the prison would “change the face of the entire community.”

The county, Newton said, is considering a three-pronged reaction to the closure news — fighting the decision, finding ways to deal with the economic impact and finally reimagining Susanville. He said the county looked into the possibilities of legal action and determined, “We don’t have a strong legal argument to make.”

One resident called Brown’s presentation “entertaining.” Another predicted, based on his comments, that Brown would not be in office long.

Brown said he was trying to get the union to set aside $2 million for CCC employees who will lose their jobs, but so far that effort have been unsuccessful, but he added the union has donated $1.1 million to oppose Newsom’s recall.

Referring to Newsom and the recall, Brown said after his election, he told a reporter he was going to “run his (Newsom’s) ass out of town.”

“Is it possible that Gavin is trying to punish you?” Brown asked.

He said Lassen County residents support the recall and don’t drink his wine.

Brown, who is African-American, said he looked around Jensen Hall and saw only four African-Americans. He said prisons in other parts of the state have more African-American employees, and if their prison was set for closure, it would be considered “racism. You know that. The only reason this prison is closing is because you’re not Black … You’re being punished for your conservative values … You go to work everyday You vote. You pay your taxes. You go about the American way of doing what’s right and now they want to close your prison and destroy you, your spouse and your (unintelligible) God. And you wonder why I said run his ass out of town.”

Brown said Newsom doesn’t care about Susanville, and he wonders if the union has ever cared about the employees here. He said the union has failed him time and time again.

“This is wrong what’s happening to you, and it burns me up,” Brown said. “He (Newsom) just doesn’t give a damn about you. That’s why.”

Rios spoke about changes in the law that will lead to the early release of prisoners in California. She said she and other district attorneys in the state have joined together in filing a lawsuit to oppose the early release of 76,541 inmates. She said many inmates would serve much less time than the minimum the court sentenced them.

She said some inmateswith lengthy sentences are being released after only four years.

“We send people to state prison every day,” Rios said, ”regardless of what your read on social media.”

She lamented that DAs tell crime victims they can feel safe for a certain period of time, but then that turns out to not be so because the inmate receives an early release.

Simas said, “In response to the incorrect information you were provided related to the Good Conduct Credit expansion, this is not an early release program. These changes do not result in the automatic release of any incarcerated individual. Under statute, incarcerated individuals are able to receive credits for good behavior and participation in rehabilitation programs. Proposition 57, which voters overwhelmingly approved in 2016 and upheld in November, gave CDCR the authority to submit regulations to provide additional opportunities for incarcerated people to receive these Good Conduct Credits.

“This effort incentivizes incarcerated individuals to have sustained good behavior and encourages them to participate in rehabilitative and educational programs, which can help reduce recidivism to make our communities safer. Our department’s focus is on a person’s rehabilitation and accountability in a manner that is consistent with public safety.”

Rios said she submitted a Public Records Act request to see how many inmates sentenced in Lassen County had received an early release. She has not received a response as required by law and has submitted her request again.

A tearful Dahle said, “This is personal.”

He said he represents 1 million people, but he is only one Republican state senator with a supermajority of Democrats, and everything he does is political. He said if the Republicans manage to force the Democrats to accept something they don’t like, they simply vote to change the rules.

“I negotiate the death of my business and my community everyday,” Dahle said. “I don’t win. I try to figure out the chess game that I play. How do I do the least amount of damage to you because I have no power? If I had the power, we wouldn’t be having this meeting tonight because I would do what’s right. What’s right is to look at all the options that are available, do what a normal person would do, and say hey, it costs less to shut this down or hey, we can serve the people better here. But that’s not the world I live in.”

Dahle said in his 25 years as an elected official, he has never heard a union representative speak as Brown did. The audience applauded.

He said the community has a few opportunities and we have a lot of things happening in our favor, including the recall.

He said crime is going up and they’re shutting down stores in San Francisco due to looting. Soon, according to Dahle, the people will rise up and demand the criminals be incarcerated, and the need for prisons will return.

“We just need a little more time for things to boil up and the people will do something about it,” Dahle said. “We have a governor who’s pretty handsome, and he’s never been punched in the face like some of us ranchers have. What I mean is some of us scrap once in a while, and it’s OK. Even if you lose you still feel good because you got a swing in. That’s where this community’s at.”

Cobb encouraged the community to get involved.

She said, “This is wrong, and if we don’t say something, we’re part of the wrong.”

Bridges pointed out the Lassen County Board of Supervisors voted 5-0 to not accept the state’s decision to close CCC.