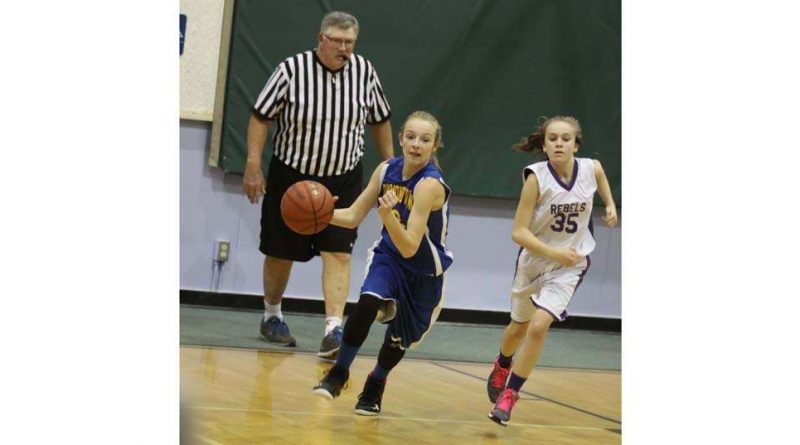 On Nov. 15, Richmond Elementary School hosted two basketball games against the Diamond View Panthers. First up was the seventh grade team. Next was eighth grade.

The first game was called with a lovely palindrome score of 32-23 on the board, favoring the home team. The Panthers picked up their pace and won game two with a final score of 44-26.

When the seventh grade teams took the court, it wasn’t long until the Rebels claimed the home advantage and were up by four.

Diamond View made its first basket with two minutes remaining of the quarter. Meka Lokey made the first basket.

Lokey started a trend with the Panthers as Jane Wengu made a basket with 1:32 on the board and Jordan Crosby made another with 38 seconds remaining of the quarter.

Quarter one ended with Diamond View leading by two.

Diamond View’s Wengu was fouled in the second quarter and was awarded four three throws between minutes three and four. Wengu gained one point for the Panthers.

Richmond put all of the Rebel energy into the final two minutes of the first half.

With 1:16 on the board, Katelyn Ernaga bolted down court and made a basket for Richmond.

With merely 10 seconds remaining of quarter two, Robbie Jones made a final statement for Richmond with a basket.

Jones enabled the Rebels to steal back the lead with a final score of 8-7 to finish off the first half of the game.

After a halftime full of strategy discussion and re-hydration, the girls were ready for quarter three.

Richmond put forth a huge slab of energy upon the start of the second half. Baylee Zahniser was first with a basket at 4:51. She was followed by teammate Emmalee Rotlisberger at 4:14 before making another basket herself at 3:40.

The Panthers made their first basket of the half with Julia Harris behind the throw with 3:35 remaining of quarter three.

Rotlisberger then brought Richmond back up on the board with another basket with 3:20 on the board.

Crosby reminded the crowd of her name by utilizing multiple rebounds to score a basket before a Richmond timeout was called.

While the girls discussed strategy and motivation, the crowd stared at the 16-11 Richmond score on the board.

Diamond View took control of the remainder of the quarter. Panther player Harris made a basket at 1:40.

The Rebels played a game of hot potato with the ball before passing to Jordan Smith who shot a basket for the purple and white team.

Blue and Yellow finished off the quarter with a basket six seconds away from the buzzer. The 15th Panther point was made by Crosby.

Richmond took the lead on quarter four with a basket by Taylor Somerville after the ball was thrown into play via jump ball.

Rebel Jones followed up with a basket with 4:41 remaining of the game.

Diamond View added two points to its tally via Wengu. Wengu showed throughout the game that her hook shot is a valuable skill she has mastered.

Between minute two and three, Richmond showed of the team’s eagerness to make their point count climb.

Unfortunately for the Panthers, the Rebel interception game was strong.

A Rebel basket made by Somerville at 4:04 was followed by a Panther pass. Smith, who then made a Richmond basket at 3:54 before any Panther defense could rush back, intercepted the pass.

The basket was followed by a Panther pass toward the other basket, but the crowd sensed a feeling of déjà vu as Smith intercepted the pass and made another basket for purple and white with 3:46 remaining of the game.

After a Panther timeout, Wengu scored another basket for Diamond View.

Ernaga and Zahniser brought in another four points for Richmond before Wengu had another shot at the basket.

Richmond was the first to score with a basket shot by Lilly Delcarlo with 6:32 on the board.

Diamond View’s Kennedy Hampton quickly countered with a basket at 5:37, 5:05 and finally at 4:58. Hampton must have seen how well interception worked for the first game; her third basket was achieved after cutting between to Rebels making a pass.

Diamond View called a timeout at 4:28 with a winning score of 6-2 on the board to make sure the girls weren’t overexerting themselves too early in the game.

Autry Satica was first to score post-timeout. With 3:53 left of the first quarter, Satica shot a basket in favor of the Rebels.

The Panthers then set off an explosion of points.

Taryn Giacomelli made the second of two free throws with 3:24 on the board.

At 2:40, Hampton passed to Acelyn McCullough who smoothly transferred the energy into a perfect shot into the net for Diamond View.

Giacomelli shot a basket at 2:11 before Friddle earned two points at 1:15 from a Giacomelli rebound.

The final point of the quarter was earned by Panther player McCullough with a successful free throw as six seconds shined on the board.

Richmond’s Grace Heimbigner made the first points of the second quarter after a jump ball throw-in.

The score was up to 18-6 favoring Diamond View.

A Panther point was scored with less than five minutes remaining of the quarter when Friddle was granted two free throws.

Richmond’s Callista Carlton made a basket at 1:28 to bring the score up to 19-8.

McCullough then wasted no time expressing her aggression via a basket at 1:00 and another at 0:46.

The final points of the half were made by Rebel player Carlton. After the ball left Carlton’s fingers, it passed through the rim as the buzzer rang out.

Richmond made a slight comeback to improve on their 15-point disadvantage upon the start of quarter three.

Katie Marsh made a basket for the Rebels with 5:45 on the clock.

Heimbigner, who scored a basket with 5:18 remaining of the quarter, followed Marsh.

Diamond View’s McCullough passed the ball to Meka Lokey and cheered with the rest of the team as Lokey brought in points 26 and 27 to the Panther side via basket.

McCullough made a basket with 2:12 on the board.

Giacomelli slipped in a basket at 1:32 with a great hook shot leaving Panther fans to cheer endlessly.

Diamond View then executed a brilliant play with 1:01 on the board. Fans watched as Friddle quickly passed to Hampton who didn’t miss a beat and sent the ball into the hands of McCullough. Next thing they knew the ball was passing through the net yet again.

Heimbigner made a basket for the Rebels after rushing the ball back from the Richmond basket. The two-point gain seemed natural for Heimbigner.

Quarter three was called with 33-16 on the board.

The fourth quarter was initiated by a Friddle basket and was quickly followed up with a basket by Marsh.

The next Panther point was also countered by a Rebel point as Lokey shot a basket at 5:13 and Heimbigner followed with a basket at 4:34.

Heimbigner set of a Rebel trend as Marsh and Giacomelli shot baskets at 4:30 and 3:55, respectively.

Panther player Ayrianna Brazzonovich made a basket at 3:45, but Marsh came back with a Rebel basket at 3:31.

With 3:20 on the clock, McCullough took advantage of a Diamond View rebound and scored a basket.

Giacomelli was awarded two free throws within the last three minutes of the game and brought Diamond View up another point.

Friddle scored the final basket of the game with 1:11 remaining of the fourth and final quarter.

The final score of 44-26 shone on the board to make Diamond View fans smile and Rebel fans understand what they needed to work on.

With a “good game” chant by both teams, the event was at an end.