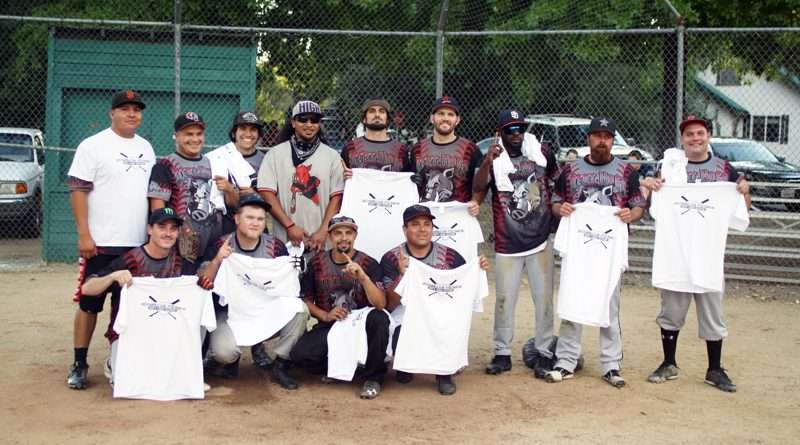 The official slow-pitch softball season has come to an end, much to many fans’ dismay.

The slow-pitch season ended with a playoff tournament held between July 27 and Thursday, Aug. 10.

The 21 competing teams were divided into five brackets based on division and season performance.

In the men’s upper division, fans saw Dirty Mike And The Boyz, Balls Deep, Those Guys and The Burros battle it out with the champion title ultimately given to The Burros.

The Susanville Peaches emerged as the overall winners of the women’s division after four days of games among the four teams.

For the coed upper division, Off Constantly finished as the undefeated victor after games with Wet N’ Wreckless, Scared Hitless and the Smokin Meatsticks.

The five coed lower division teams – No Glove No Love, the Sore Losers, Fever Pitch, the Bad Intentions and the Juggernauts – saw a total of nine games among them with the champion title ultimately crowned upon Fever Pitch.

The men’s upper division began its bracket with two games on July 28. Dirty Mike And The Boyz took on Balls Deep and earned their first victory. The Burros played against Those Guys and left with the win as well.

On Tuesday, Aug. 1, Those Guys and Balls Deep played the first game of the loser’s bracket with Those Guys finishing on top.

Dirty Mike And The Boyz then took on The Burros to continue the regular bracket play, and The Burros emerged as victors once again.

Due to a downpour, lighting overhead and some deafening bouts of thunder on Wednesday, Aug. 9, the men’s upper division championship game was delayed until Aug. 10.

On Aug. 10, fans saw a close game between the two rival teams with the victory ultimately granted to The Burros. Some tension between some of the players nearly resulted in a brawl between the teams, but all was eventually solved peacefully and the men parted ways until next season.

As for the men’s lower division, the first victors of the bracket were the Dirt Hogs and the Micro Brews after games played against the Peloteros and the NorCal Rippers, respectively, on July 28.

On Aug. 1, the Peloteros then earned their first win of the tournament after taking on the NorCal Rippers in the loser’s bracket.

On Aug. 3, the two initial champions battled it out on the field to reveal Dirt Hogs as one of two teams to progress to the championship match.

After their loss against Dirt Hogs on Aug. 3, the Micro Brews played against the Peloteros in the loser’s bracket to determine which team would take the other slot in the championship game.

On Tuesday, Aug. 8, the Dirt Hogs faced the Peloteros once more as the championship title was now at stake. After a long game and some great energy seen from fans and players alike, the Dirt Hogs were crowned winners.

The women were one of the first divisions to start the tournament as a whole as the four teams played their first game on July 27.

The Bad News Babes played and won against TKAT, and the Susanville Peaches followed suit against NST.

The women then met the diamond again on Aug. 1 as the Susanville Peaches played a great game against the Bad News Babes, and ultimately won. The first game of the loser’s bracket followed with TKAT taking on and falling to NST.

With the Susanville Peaches guaranteed a slot in the championship game, it was up to the Aug. 3 game between the Bad News Babes and TKAT to determine who would take the Peaches on.

After a rough game with a ton of spirit, the Bad News Babes left the field with their slot in the final game secured.

The four coed upper division teams started their bracket on July 31 with Wet N’ Wreckless taking on their rival, Off Constantly, and the Smokin Meatsticks fearlessly facing Scared Hitless.

With Off Constantly and the Smokin Meatsticks declared winners, the second game of the normal bracket was held on Wednesday, Aug. 2.

Once Off Constantly was officially declared the winner of the game, Wet N’ Wreckless and Scared Hitless took the field and played game one of the loser’s bracket.

Though Scared Hitless was definitely on a roll, they proved to be no match against Off Constantly during the championship game on Monday, Aug. 7.

The coed lower division saw the most games of all with a total of five teams competing for the gold.

No Glove No Love and Fever Pitch initiated the tournament with wins against the Sore Losers and the Bad intentions, respectively, on July 27.

The Juggernauts then had their first shot at the field on July 31 as they took on No Glove No Love. Though the latter team was determined to earn its second win of the tournament, the Juggernauts quickly shut down the dream with a wild win.

Later that same day, the first game of the loser’s bracket saw the Sore Losers earn their second loss of the tournament with opposing team the Bad Intentions leaving the field proudly.

Fever Pitch then took on the Juggernauts on Aug. 2 with full intention of not repeating the mistakes seen from No Glove No Love, but the Juggernauts again left the field with the win.

Unfortunately for Bad Intentions, though, Fever Pitch was in it to win it. The Aug. 4 game granted Fever Pitch another shot against the Juggernauts.

The championship game for the coed lower division was held on Aug. 7 with a vicious battle between the Juggernauts and Fever Pitch.

With passion and drive, Fever Pitch stole the win and granted the Juggernauts their first loss of the tournament. With the win, Fever Pitch was one game away from the win.

The Juggernauts took on Fever Pitch for a championship part two game later during the evening of Aug. 7. Unfortunately for them, Fever Pitch wasn’t going to back down. With four wins and one loss, Fever Pitch was crowned victors of the division.

Though the season met its end by the third week of August, a majority of the slow-pitch softball players will be seen on the field again during the 2018 season to start in May.