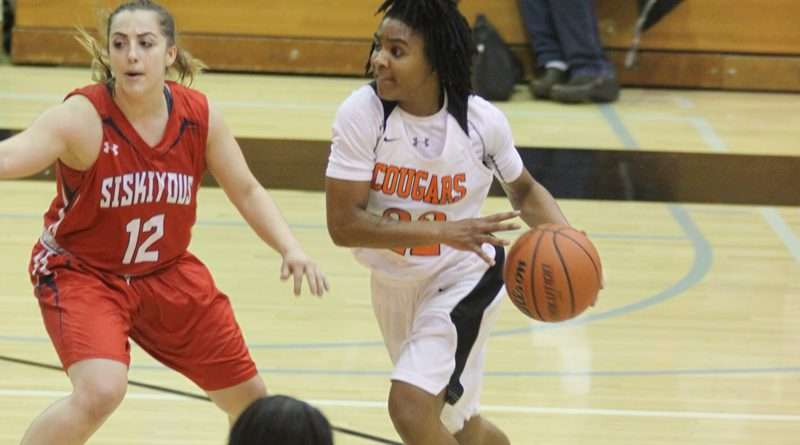 Justice Akins dribbles past the College of the Siskiyous players with ease during the first half of the home game Jan. 17. Photo by Ashley Grogan
Sports
January 26, 2018January 31, 2018 Ashley Grogan, Sports Editor

Between Saturday, Jan. 13 and Wednesday, Jan. 17, the Lassen Community College women’s basketball team sought out victory against the Feather River Golden Eagles and the College of the Siskiyous Eagles. Unfortunately, the Cougar might wasn’t enough to swat either swarm of bird from the sky.

Lassen started their quest on Jan. 13 in the Feather River Community College gymnasium.

Lassen entered the court with determination clearly visible in their every move, but the Golden Eagles couldn’t help but take advantage of the home court full of fans cheering them on.

The first half of the game ended with the Cougars only down by eight points, but the Feather River lead only compounded as the game progressed in the second half.

Leading the Lady Cougars on the board was Jocelyn Gandara with 17 points to her credit, eight rebounds and three steals.

After taking on the Golden Eagles, Lassen was determined to perform better against the Siskiyous Eagles at home.

The Siskiyous Eagles were brutal from the start with their three-point success percentage exceptionally high.

In the first three and a half minutes, the Eagles had four good three-pointers under their belt. Carrier ensured all the glory wasn’t given to the visiting Eagles, however, as she hit a good layup with 8:14 on the clock.

Camacho was next to make an impression on the scoreboard with a good free throw at 6:33.

Hannah Carson caused an uproar of cheers in the stands with her interception of an Eagle pass and a layup to follow with 6:12 remaining of the quarter.

Following Carson, Carrier was again in the spotlight with a free throw that granted Lassen their sixth point thus far.

The ladies of the Siskiyous team shifted the focus back onto them after Carrier’s free throw with two two-point field goals and a couple three-pointers.

Then, Justice Akins hit a basket that truly sparked some cheers as it went through the net as the team timer buzzed.

With 1:21 on the clock, Jocelyn Gandara made her first basket of the game, but the Eagles countered with two baskets before the quarter was brought to an end.

With a 28-13 Siskiyous score on the board, Lassen started the second quarter slightly discouraged.

The Eagles hit a rebound soon after the quarter started, but a determined Carson countered with a rebound of her own to keep the score gap as low as possible.

The Eagles then managed a two-point field goal at 7:41, but a three-pointer by Desiree Bounds followed within 20 seconds.

Siskiyous then really turned up the heat with three three-pointers and a layup in the span of two and a half minutes, and with only a couple good free throws from Camacho to counter, the Lady Cougars were feeling the burn.

Gandara hit the next field goal for Lassen with a jump ball throw-in halfway through the second quarter, and after a couple Eagle free throws, Camacho was quick to follow with another basket.

By the time the clock hit 1:45, Lassen had gained four points thanks to the efforts of Gracie McCoy and Carrier, and the Eagles only managed to gain three.

In the final 1:45 of the first half, though, the Siskiyous ladies were at full blast with six good free throws and two good baskets.

Thus, the Lady Cougars ended the first half of the game down by 28 with the board reading 58-30 in favor of the Eagles.

While the Cougars were refocusing their efforts during the halftime break, the many Cougar fans in the gymnasium honored members of local law enforcement for their annual Back the Badge recognition event. The law enforcement officers present at the game were acknowledged as the countless fans stood and applauded their service.

In addition, there was a moment of silence for the many men and women who have lost their lives in the line of duty.

At the start of the second half, Gandara hit a basket to give the Cougars the confidence boost needed.

The Eagles counterd with a three-pointer, but at 8:41, Akins scored a two-point field goal at the top of the key in order to keep Lassen on top for the third quarter so far.

Another basket by Siskiyous was followed by two free throws by Carson.

A rebound by the Eagles was then countered with a basket and good free throw by McCoy.

Siskiyous advanced by another two points at 1:44, and Camacho and Carson worked together to bring in three points for Lassen by 1:50.

In the final minute and a half of quarter three, Siskiyous hit two good free throws and a layup while McCoy brought in another two points via field goal.

Lassen started quarter four down by 24 points, but they were determined for that to change.

Gandara hit two good free throws to start the quarter, but Siskiyous were quick to counter with two baskets by 8:26.

Savanna Miller hit a three-pointer at 8:02 to bring Lassen to 54 points.

Then, things got heated on the court once again as an Eagle was sent to the free throw line after Akins made a personal foul against the Siskiyous player.

After two good free throws, Siskiyous followed with another set of free throws and a three-pointer.

Gandara put a stop to the Eagle success, though, with a three-pointer, and was followed by a hook shot by Camacho, two free throws and a layup of her own and a basket by McCoy.

Siskiyous hit another good couple free throws with less than four minutes on the clock, but Gandara knocked away the Eagle accomplishment with a basket at 2:58.

With 86-67, Siskiyous, on the board, the Cougars sent Gandara in to steal the ball, enter the key and score on her own rebound.

Then, Lassen’s focus was on McCoy as the Lady Cougar weaves through the Eagles to hit a layup and a two-point field goal to end the game with Lassen down by 13 points.

The final score of 86-73, Siskiyous was not ideal for the Cougars, but the intensity and determination seen in the second half of the game proved that Lassen certainly has what it takes to take the Eagles down when given another chance.