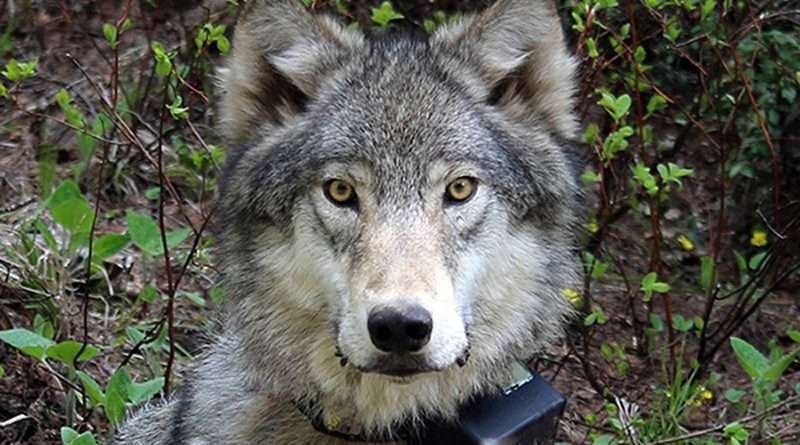 Lassen County’s recent encounter with wolves began with OR7 back in 2011 (seen here fitted with a GPS collar), the first wild wolf in the state of California in nearly a century. There are now two wolf packs in the state — one in our county named the Lassen Pack and another in Siskiyou County named the Siskiyou Pack. File photo
News
October 26, 2017October 26, 2017 Sam Williams, Managing Editor

A veteran rancher with private land and a public grazing allotment in Western Lassen County is pulling up stakes and moving all his livestock out of Lassen County due to the interaction between his cattle and wolves from the Lassen Pack.

Wally Roney, a multiple-generation rancher who owns property in the Clover Valley area off County Road A-21, said he believes he’s lost five cows, mostly yearlings, to wolf depredation, despite the inability of California Department of Fish and Wildlife investigators to confirm a single wolf kill until Oct. 13 — the first in the state this century.

Jordan Traverso, a spokesperson for CDFW, referred the newspaper to its website reports for details.

“The thing you need to know,” Roney said, “is they (CDFW) notified me of the presence of the wolf they had collared at each one of those kill sites prior to me finding the dead animals.”

When asked why he thought the CDFW had not reported the cattle deaths as wolf kills, Roney said, “You just identified it. They’re not consistent, and they don’t want people to know the truth.

That’s pretty simple. The only thing I can say and accurately tell you is what they told me. They told me the exact point that wolf was at prior to the kill. I had been to each one of those points the night before, and then they called me and told me she’d been there. I went and checked, and I had a dead animal on all five points. It doesn’t get much simpler than that.”

Roney said when he asked investigators why they couldn’t confirm wolf kills of some of his cattle when they had notified him the female wolf with a GPS transmitter was in the area the night before he found a dead animal, he said they told him “it was coincidental.”

“I feel sorry for the citizens of Lassen County,” Roney said. “They’re going get what they want. Well, guess what? They’re killing my cows. They’ve been killing them all summer. I now have the first verified kill in California. And I’ll tell you this, it took a little bit to get it verified.”

Roney said he’s in the process of moving his cattle out of Lassen County “prematurely” to the Central Valley, and he wonders about his ability to use his private property as rangeland in the future.

“That’s the reason we have the property up here, so we can use it,” Roney said. “Now all of sudden we’re finding, no, we can’t use it. We can’t afford to feed the wolves.”
And Roney said his only alternative is to move his cattle out of Lassen County.

“I’m going to move my cattle, but I’m not sure I’m going to be able to come back and even use my private property because I refuse to feed the wolves or the wolf-dogs,” Roney said.
And he expressed his concern for the future.

“We’re going to have a real problem, or potentially a big problem, here in Lassen County,” Roney said. “I’m taking the food source away from them. I’m moving my cattle right now.”

According to Roney, he’s frustrated because, “I sure as heck don’t have the support of Lassen County behind me. That’s what’s disappointing.”

While the Lassen County Fish and Game Commission plans to discuss a way to repay ranchers for losses to wolves, Roney said that would make things worse because of the way wolf depredations are confirmed.

Roney also expressed his concern about wolf-dog hybrids in Northern Lassen County, and the county government’s failure to regulate them.

Roney said, “I’m after the true facts, whatever they are. We’ve got to deal with the facts, not their bullshit … The thing that’s really got me upset is they know there are 114 of them (wolf-dogs) in Lassen County” near Ravendale. “I can’t tell the difference (between the wolf-dogs and wolves) … Nobody wants to solve the problem.”

As an example of the misinformation he gotten from state officials, Roney said, “They also claim these wolf-dogs don’t like coyotes, but we’ve seen them play with the coyotes for half an hour. It’s like you can’t believe anything they say. You know, they say something, and then we see just the contrary.”

Roney’s wife Billie also expressed her frustration at seeing the wolves or wolf-dogs near the cattle.

“They’re not scared of us,” she said. “They weren’t that far from where we were shipping our cattle, and the only right we have is to watch them? It’s wrong. It’s just wrong on so many levels.”

To make her point, Bille Roney shared several cell phone photos with the newspaper of the wolves in an open meadow watching the ranchers load their cattle onto trucks in broad daylight.

Another rancher in the area who’s familiar with the wolves and the state’s tracking of them believes the Lassen Pack will move to lower ground in Plumas County once winter comes and deep snow falls in the area.

So, how did these wild wolves find their way into Lassen County?

This information comes from the California Department of Fish and Wildlife website at wildlife.ca.gov/conservation/mammals/gray-wolf.

The gray wolf (Canis lupus) is a native species that was likely extirpated from California in the 1920s (the last known wild wolf was shot and killed near Litchfield in 1924), and from most of its range in the United States by the mid-1930s. A small population began naturally recolonizing Northwestern Montana, reaching about 65 wolves by 1994. Then in 1995 and 1996, the U.S. Fish and Wildlife Service reintroduced two populations of wolves, one in Central Idaho and the other in Yellowstone National Park, Wyoming.

Little is known about the historic abundance and distribution of wolves in California. The human population and human development have increased dramatically since wolves last occurred here, so CDFW is uncertain about where and how many wolves will establish when they naturally recolonize the state.

The gray wolf is federally listed as an endangered species and is protected by the Endangered Species Act in California. Under the Act, it is unlawful to “take” any listed wildlife unless permitted by regulation (50 CFR 17.21). The term “take” means to harass, harm, pursue, hunt, shoot, wound, kill, trap, capture or collect or to attempt to engage in any such conduct. Harass is further defined as “an intentional or negligent act or omission, which creates the likelihood of injury to wildlife by annoying it to such an extent as to significantly disrupt normal behavioral patterns which include, but are not limited to, breeding, feeding or sheltering” (50 CFR 17.3).

Penalties associated with the Act may include up to a $100,000 fine, up to one year imprisonment or both.

To report wolf activity or sightings — Call the California Department of Fish and Wildlife at 225-2300.

The caller should follow these instructions to protect the scene:
·Avoid walking in and around the area.
·Do not touch anything and keep all people and animals from the area to protect evidence.
·Place a tarp over the carcass.
·If possible, use cans or other objects to cover tracks and scats that can confirm the depredating species.

This information from the California Department of Fish and Wildlife recounts wolf activity in the state since OR7 became the first wild wolf in California since 1924.

December 2011 — A lone male wolf from the Imnaha Pack in Northeastern Oregon, known as OR7 (nicknamed Journey by elementary school students in the state), entered California northeast of Dorris, a small town in Siskiyou County. During his travels he traversed the Lassen and Plumas National Forests and moved as far south as Tehama, Shasta and Butte counties. OR7 returned to Oregon in April 2013.
Nov. 10, 2015 — Ranch hands discovered five wolves feeding on a dead calf in Lassen County. Investigators later found a cow carcass nearby. Investigators believe the cow many have been dead for two weeks. The cause of the deaths could not be determined.
May 2016 — U.S. Forest Service biologists discover evidence of wolves in the Lassen National Forest. A 75-pound female wolf, named LAS01F, was captured and fitted with a radio collar to track her whereabouts.
July 2017 — CDFW confirms the presence of the Lassen Pack, the second known family of wolves in Northern California. Biologists suspected the presence of a new wolf pack in 2016 and installed trail cameras. DNA testing revealed the male wolf is from the Rogue Pack in Oregon, but the female’s origin is unknown. The Lassen Pack is believed to contain a breeding pair and three pups.
Sept. 19, 2017 — A dead calf is reported on private land in Western Lassen County. No evidence of a chase or kill scene was observed. Examination of the hide and tissue beneath it did not reveal wounds consistent with depredation by wolves or another carnivore, but the GPS-collar reported LAS01F was at the site about 9 p.m. Sept. 18. According to investigators, the calf was not killed by a predator, but “wolf, coyote and mountain lion tracks were observed near the carcass, and available evidence suggests wolves fed extensively on the carcass … ”
Sept. 27, 2017 — CDFW staff informs a rancher in Western Lassen County that GPS-collar locations reveal LAS01F near his private land in Western Lassen County. The rancher reports finding two calf carcasses that day and a third on Sept. 30. DFW investigators report, “no evidence of a chase of kill scene was observed.” According to their report, “The cause of death is unknown, and there was no specific evidence indicating the animal was attacked or killed by a predator. However, because so little of the carcass remained by the time of investigation, it could not be determined whether or not the animal was attacked or killed.”
Sept. 30, 2017 — A dead calf is reported on private land in Western Lassen County. CDFW staff was already scheduled to investigate two other cattle carcasses on the same property the following day.
Investigators found “no evidence of a chase or kill scene,” but the GPS collar reported LAS01F was near the site about midnight Sept. 27. Investigators determined there was “no evidence the calf was killed by wolves … but wolf and coyote tracks were observed near the carcass, and available evidence suggests the adult wolves of the Lassen Pack fed on the carcass … ” Investigators determined there was no evidence predators killed the other two cows either.
Oct. 13, 2017 — Lassen County is the site of the first confirmed wolf kill in the state this century. A rancher in Western Lassen County reports seeing “five wolves in close proximity to a cow carcass on private land.” The rancher reported the 600 pound calf was alive the previous evening, and he suspected wolf depredation. Investigators found an area that included “kick marks and disturbed ground consistent with a struggle. Wolf tracks were observed within the area. The hide contained numerous pre-mortem bit(e) marks on the right front shoulder and both rear flanks and legs … The locations and extent of pre-mortem bit(e) wounds are consistent with that of a wolf attack. LAS01F was at the carcass location for at least six hours the night the cow died, and wolves were observed at the carcass the following morning. These factors are sufficient to confirm this incident as a wolf depredation.”