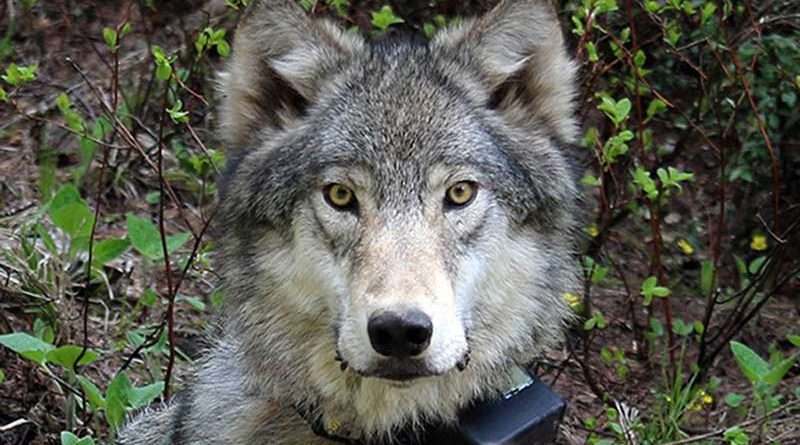 Kent Laudon, a wolf biologist with the California Department of Fish and Wildlife, said it’s much easier to track the location and activity of a wolf if it has a radio collar. File photos
News
May 5, 2018May 3, 2018 Sam Williams, Managing Editor

Most of us know about OR-7, the first wild wolf in California in nearly a century, but there are other wolves that have been detected in the Golden State of which you may not be aware, according to an April 2018 post on the California Department of Fish and Wildlife site, wildlife.ca.gov.

According to the website, the CDFW believes it’s important for residents to know the state of California is not reintroducing the wolves, gray wolves pose little safety risk to humans, wolves in California are protected under both the California and federal Endangered Species acts, CDFW encourages the use of non-lethal methods to avoid and/or minimize livestock losses from wolves and CDFW values and investigates public information regarding wolf sightings.

Kent Laudon, a wolf biologist from the California Department of Fish and Wildlife, said the wolves naturally disperse from their natal territory, sometimes covering large distances.

“Wolves are long-distance, big-time travelers,” Laudon said. “That’s just how canids are wired … Wolves are built for it. They have those long legs, especially if you see them after they shed their winter coats … They’re kind of like the long-distance runners of the animal world. They travel great distances … ”

Researchers want to know where the wolves go when they leave their pack. Laudon said biologists are working to create a detailed DNA database to track the lineage of the wolves from scat, hair and other biological material, so biologists can track and monitor the animals as best they can.

For example, Laudon said it’s “almost impossible” to track dispersing animals that are not equipped with radio collars.

“Once we get a collar on an animal or in a pack, the resolution is so much greater,” Laudon said. “We know at a certain time there is a percentage of the population that is dispersing, and right now some of those figures in the literature are 10 or 12 percent annually.”

But Laudon cautioned those are estimates. He said the key dispersal times are the fall and early winter or the spring.

Having a collar on an animal in a pack gives biologists a great deal of information.

“Once you have a pack, you have a social unit,” Laudon said. “In the case of the Lassen Pack, the female is collared — the breeding female and the breeding male are the best ones to get — because unless something drastic happens, they’re not going to go anywhere. They’re not going to disperse as long as they stay alive. If she loses the male, there’s a chance she could leave, but lots of times she’ll stay — and who knows what they’re thinking — she may wait for another male to show up from who knows where. It would be an outside male because all the others (in the pack) would be her offspring.”
Here’s a summary of the wolves detected in California, according to the website wildlife.ca.gov.

OR7
Dubbed “Journey” by California school children, OR7 was born into Oregon’s Imnaha pack in 2009, and he was fitted with a radio collar by the Oregon Department of Fish and Wildlife in February 2011. In September of that year, he left his pack and traveled through Eastern Oregon to the Southern Cascades, crossing into California Dec. 28, 2011. OR-7 spent much of 2011 and 2012 in our state — mostly in the mountains west of Lake Almanor.

Before returning to Oregon in April 2013 (where he found a mate and formed the Rouge Pack), he even visited the Sacramento Valley floor near Redding and Red Bluff. OR-7 and his mate produced pups in 2014, 2015, 2016 and 2017. Two of the pups from the 2014 litter have visited California, including CA08M, the breeding male of the Lassen Pack, and CA10F, a wolf that visited Siskiyou County in early 2017. Another Rouge Pack member, OR-54, has spent time in California.

Laudon said OR-7 never returned to his natal territory.

“OR-7 dispersed,” Laudon said. “He went back to Oregon, but he never went back to his pack. His natal pack is Northeastern Oregon. He found a female in Southwestern Oregon and they pair bonded and bred and started to carve out their own territory. He’s been there ever since. It’s called the Rouge Pack.”

CA10F
Tracks believed left by CA10F were discovered in Siskiyou County in January 2017. Born into Oregon’s Rogue Pack in 2014 and a littermate of CA08M, her whereabouts remain unknown.

OR-54
OR-54, a female and the fourth member of the Rouge Pack to venture into California, crossed into the state and traveled more than 500 miles before returning to Oregon in February 2018.

“Sometimes wolves do what we call extra-territorial movements, and that’s what OR-54 did originally,” Laudon said. “She came to the state of California, and then she went back to Oregon and started hanging out in her natal territory again.”

But OR-54, equipped with a radio collar, returned to California April 15, 2018, and her whereabouts currently are being monitored.

“In the 28 or 29 days she was away from her natal territory, she covered a minimum of 506 miles,” Laudon said. “When I say minimum, she’s recorded every three hours, and we just connect the dots, not how she really went.”

He said there was a Facebook video of her near Chester. Within a week, she was back in Oregon.

“Without a collar, you’d be saying, ‘I wonder where that Chester wolf is?” Laudon said. “And the answer is, ‘Not in Chester.’”

In addition, he said she’s made several other extra-territorial journeys.

OR-44
OR-44, a male wolf wearing a GPS collar, crossed into California in March 2018. OR-44 is two years old and was born into the Chesnimnus Pack.

Officials continue to monitor his whereabouts.

The Shasta Pack
The Shasta Pack, California’s first known contemporary pack, produced five pups in 2015 in Eastern Siskiyou County. The breeding pair came from the Imnaha Pack (as did OR-7). A trail camera first noticed them in August 2014, and they were photographed again in February and May 2015. A yearling male (CA07M) was detected by trail cameras, tracks and scat in May 2016, and the animal was observed in Northwestern Nevada in November 2016.

CDFW believes the pack no longer exists, although one lone unidentified wolf was seen roaming in the pack’s territory in the summer and fall of 2017.

Laudon said biologists “have no clue” what happened to this pack.

“A good speculation is that something happened to one or both of the breeding pair. They died.” Laudon said. “When that happens, when one or both of the breeding pair dies, you can expect the rest of the pack to — I call it ‘starburst’ — they all just go off in their own direction because the cohesiveness (of the pack) dies. And that may be what happened because one of the offspring was found in Nevada. When that pair bond breaks, it seems to encourage early dispersal.”

Laudon also said sometimes a newly established pack may shift its home range, but he doesn’t think that’s what happened to the Shasta Pack.

“It’s not a pick up and move to a completely different place,” Laudon said.

“It’s a shift using some of their former home range, but they’ve adopted some new country and left some old country behind.”

If they formed a second pack, Laudon said, “People would see them. They’d see tracks. We would hear about it.”

Laudon said while there may be individuals from that pack “floating around,” he believes the pack has dispersed, noting the presence of CA07M in Nevada and the black wolf seen near the Lassen Pack, that “could be from the Shasta Pack. (But) there are a lot of black wolves out there, so it could be anybody.”
What happened to the Shasta Pack remains a mystery.

“A wolf may do several big loops out of its pack territory,” Laudon said. “They may be gone for a week or two or maybe longer, and one day they just never come back. And, of course, wolves die for all kinds of reasons.”

A trail camera first photographed the pack’s breeding female, LAS01F, in August 2015, and in February 2016, the tracks of two wolves traveling together were discovered.

Through genetic testing, the male (CA08M) was born in the Rouge Pack in 2014. CDFW biologists believe LAS01F dispersed from the Northern Rocky Mountain population, and in 2017 the pair produced four pups, and three are known to have survived through March 2018. LAS01F was fitted with a radio collar in June 2017. A lone black wolf has been seen near the pack, but its origin remains unknown.

Laudon said he’s not been receiving radio transmissions from LAS01F, and the speculation is she’s underground in a den taking care of pups.

“We haven’t heard anything from her radio collar in a while, and one explanation is she’s in a den,” Laudon said. “The speculation is right now she’s pretty tied to the den, nursing and lactating. She’s probably underground, and the collar she’s wearing is having difficulty communicating with the satellites.”

Laudon said the three yearlings won’t be sexually mature until this fall. They may be very involved with the new pups, or they may be more interested in exploring, but if they travel, they usually will return to the pack during the summer. It all depends upon the personalities of the individuals that make up the pack.

As the female would not normally breed with her offspring, littermates generally do not breed with each other.

According to the Caltrans website, a high wind advisory is in effect from Johnstonville to the Nevada state line. Travel…