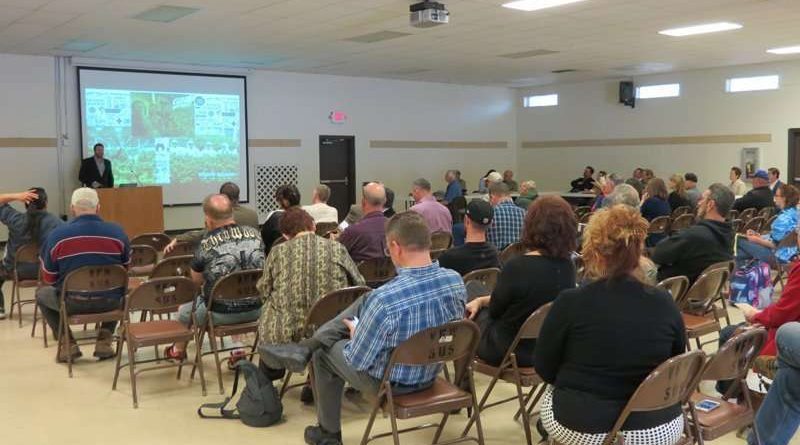 Following a potential commercial cannabis project presentation Tuesday, March 14, the Lassen County Board of Supervisors Marijuana Ad Hoc Committee made a suggestion on how to move forward, and meeting attendees were able to voice their opinions on how the county should react to changing marijuana laws.

The overall directions the board mentioned were placing a moratorium on issuing commercial marijuana licenses and looking into having a small outdoor growing plot for medical marijuana users, and some of the board members wanted staff to look into issuing licenses in the future to try and get ahead of what they claimed was the inevitable.

According to County Administrative Officer Richard Egan, the Ad Hoc Committee will take the recommendations and put together some proposed amendments to the county marijuana ordinance. The amendments will be put before the board during an April meeting, Egan said, in order to get ahead of the growing season.

Moving the meeting to Jensen Hall at the Lassen County Fairgrounds, seats were nearly filled with those eager to learn more or express their opinions regarding cannabis in the area.

Kyle Bishop, CEO of Kine Consulting, a medical cannabis growing corporation in Colorado, presented the board with a project titled Kine Co. Lassen.

The company’s desire? For Kine Consulting to move to the county and grow cannabis. According to Bishop, they don’t want to open a dispensary or sell locally; they want to grow.

However, following his presentation, several members of the board had the same question. “Why Lassen County?”

Bishop offered several answers: the environment was better for growing cannabis than in Colorado, they wanted to stay away from Southern California politics, and he believed both Kine Co. and the county would be mutually benefited

Out of sight, out of mind

One of Bishop’s main themes throughout his presentation of the potential corporation coming to the area is that they do not become a nuisance to the area.

“Out of sight, out of mind. We want everybody to forget that we’re here, except for the jobs and the income that we’re creating,” said Bishop.

He proposed a project like this would bring a boost to the local economy and many jobs, including those working at the facility, as well as those working on the buildings like contractors, plumbers, electricians and others.

In addition, Bishop spoke about how Kine’s current grow is dedicated to compliance and transparency. Everything is labeled, cameras constantly monitor activity in the facility, which would be surrounded by gates, and color-coded shirts make it easier to determine who should and should not be around the plants.

Bishop explained Kine’s desire to start quickly in order to get a chance at procuring needed state licenses that will be available in 2018.

Time to pick a direction

According to Lassen County Counsel Bob Burns, the board has known for sometime it needs to make a decision on where to go concerning commercial marijuana licensing. However, some roadblocks are in the way, mainly concerning regulation from the state.

“We don’t know where they’re going yet,” said Burns.

However, the local government has the ability to allow for commercial marijuana or not.

Teeter mentioned his concern with the opposing federal view of marijuana to that of California’s.

“To my mind, that closes the commercial aspects of marijuana in our county,” said Teeter.

Gallagher mentioned, while sympathetic to medical marijuana users, he did not want the county to be “the first kid on the block” concerning the allowing of commercial cannabis.

The Ad Hoc Committee members suggested a moratorium on licensing for now, and finding a way to get a small plot for medical marijuana users.

However, some on the board had opposing views to their fellow supervisors.

Jeff Hemphill noted that the situation was not going to go away.

“We know it’s here. We need to find a licensing scheme so we can get some money,” Hemphill said.

He urged growers to contact their supervisors noting what they would be willing to pay for a fee while growing; however, County Administrative Officer Richard Egan noted the fee structure could only be based on recouping what the county spends, and a tax structure would have to be approved by voters, and couldn’t happen until mid 2018.

Tom Hammond noted he had a lot of doubts about a ban working, saying, “this board needs to be proactive rather than reactive… if we can get some money, let’s entertain that.”

During the meeting, the supervisors opened the floor to meeting attendees to voice their concerns or thoughts about marijuana in the community.

Local grower Randy Bock, who noted he did not grow last year in order to follow county ordinances, believed a moratorium on licensing for now would not help what the county was having issues with – the large, illegal grows. He said they didn’t follow the ordinance before, so they still wouldn’t.

He suggested using the county registration list for medical cannabis to help.

Additionally, a 25 year resident Jeff Sheets, and his wife Norma spoke to the benefit of being able to grow plants outside, which is currently banned by county ordinance.

“You keep asking us to hide this plant,” said Jeff Sheets, noting the county kept making it more difficult and expensive for him to grow medicine.

Dennis Hines, a Doyle resident, addressed the board referencing the extra expense medical marijuana users would incur if they could not grow their own plants outside.

Hines suggested that if the county entertains the idea of allowing large scale grows, they should “let the little man grow, too.”

Lew Oring thanked the Ad Hoc Committee for its decision, saying they are on the right track. To Kine Co., Oring said, “You guys picked the wrong county.”

Another resident, CJ Johnson, spoke to the board noting that the suggested 10×10 plot would not be big enough.

Joseph Turner, of Milford, spoke as a disabled combat veteran who has been prescribed opioids for years.

“I’m sick of it,” he added, later adding a prohibition of substances like marijuana only inflates criminal enterprise.

He also posed a question to the board asking “why not Lassen County,” to bring commercial cannabis, noting the area needed more job diversity.

Iona McCain noted her concerned with the safety in her Litchfield area, and wondered if bringing Kine Co. could offer financial assistance to be here and for law enforcement.

Ron Edwards offered his help in understanding marijuana laws to the board. He said the Lassen County Sheriff’s Department could not keep up with the demand.

Another speaker wondered why the county would want to chase away jobs and funding. He added the supervisors should forget about the federal government and represent the people in Lassen County.

Another speaker, however, did not want to fall for more false promises. He said he’s seen the promises of organizations coming in to create growth, money and jobs, all to no avail.

The information presented to the board during the March 14 meeting was information only, no definitive direction was provided to county staff.

The Ad Hoc Committee will take the received information and present some ordinance amendments to the board at a meeting in April.

Utah Tech University students excelled in the classroom during the Fall 2022 semester with 1,282 UT students, or 10 percent…

Susanville’s Monticola Club hosts a Mother’s Day Brunch from 10 a.m. to noon, Saturday, May 13 at the clubhouse, 140…

Student News January’s early release for We Are Lassen will be tomorrow, Tuesday, Jan. 31. You must be wearing your…

Utah Tech University students excelled in the classroom during the Fall 2022 semester with 1,468 UT students or 11 percent…