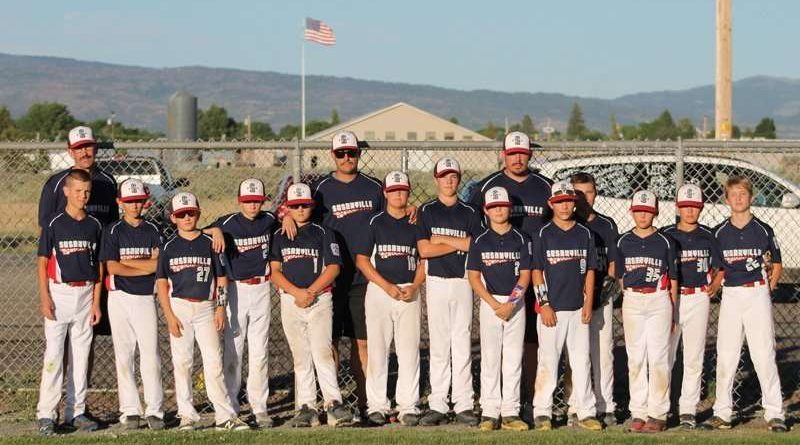 The Susanville 11- and 12-year-old All-Stars returned home with the silver after playing proudly at the District 48 Championship Tournament at the Modoc Little League field.

Susanville played a tough five games between June 17 and June 21. The team emerged victorious from three games to earn the second-place title.

Game one for the Susanville All-Stars put the boys at a disadvantage. The Greenville team bested Susanville at the plate and on the mound in order to win the match 13-5.

Throughout the game, Susanville managed a mere three hits to counter the nine made by Greenville. Though the game seemed discouraging as a whole, Susanville used it as a learning opportunity and gave it their all regardless.

For the Greenville game, Caden Cullison started on the mound and pitched two complete innings. Cullison gave up five hits, three walks and seven runs with one error. He struck out four batters.

Kevin Kiar followed Cullison on the mound and pitched for one and two-thirds innings. Kiar struck out one and gave up two hits, three walks and three runs with two errors.

Next on the mound for Susanville was Seth Mallery for the remainder of inning four and the entirety of inning five. Mallery struck out one and gave up two hits and three runs with three errors.

Offensively, Susanville was not on top of their game against Greenville. Despite the struggle, though, they still worked hard at bat.

Osborn was responsible for three RBIs and Marshall brought in one.

Ultimately, Susanville fell 13-5 and landed a spot in the loser bracket.

The unfortunate result of game one did not sway Susanville away from their goal to be champions.

One June 18, Susanville took on Chester for the first round of the loser bracket. With a final score of 8-7, Susanville left with the win.

Susanville was able to hit first and managed two runs in the first inning.

Innings three and four resulted in more success for Susanville as the boys scored two runs in the former and four in the latter.

Leading the way at the plate for Susanville was Osborn. He went 2-for-3 with two singles and two RBIs.

Moss went 1-for-2 with a two-run homerun in the first inning. Tyler Zahnsier went 2-for-3. Cullison, Kiar and Jack Wright each had one hit, and Makau Michel had a hit as well as one RBI. Chappuis and Marshall also had one RBI each.

Chappuis was first on the mound for Susanville against Chester. In the first inning, he gave up three hits, two walks and five runs with three errors.

Zahniser then took on the mound to finish the first inning and pitch for the second. He gave up one hit and one run with no errors or walks.

Marshall threw for inning three and ended up giving one hit and one run with three errors.

Moss came in and closed the game with three innings on the mound. He struck out three, and with a strong defense behind him, he gave up no runs or hits. With Mallery at short-stop and Tucker Schall at second, Susanville turned a 6-4-3 double play to Ethan Shaw at first base to stop the scoring threat in inning six.

Susanville was able to successfully hold off the Chester team and get the 8-7 win and secure their spot in a third game.

Susanville was at bat first and used the offensive lead to their advantage.

Leading the way at bat was Osborn. He went 4-for-4 with one single, two doubles and one triple with two RBIs.

Zahniser went 3-for-4 with two singles and a triple. Mallery went 2-for-3 with one single and one double.         Chappuis, Marshall and Michel each had one hit. Moss and Hayden Johnson each hit a homerun during the game.

Mallery started the game pitching for Susanville. He threw one inning with one strikeout, one hit and one run.

Kiar followed on the mound with one and one-third innings pitched. He struck out two and gave up one walk, two hits and two runs.

Wright was third to pitch. He finished off the third inning and made a significant dent in the fourth. He struck out two and gave up one walk, two hits and one run with one error.

Chappuis pitched to the last Feather River batter. Chappuis came out on top striking out the batter and sealed the win with a four-inning mercy rule.

Susanville’s bats and tough defense proved to be too much for the Feather River team and the boys came home with the 16-4 victory.

Game four saw Susanville take on Greenville for the second time. While Greenville had bested the boys initially, Susanville was ready for payback.

Both teams appeared to be on top of their game as three innings passed with no score on the board.

However, Susanville was prepared to break the 0-0 tie first with their first run scored in the fourth inning. After the tie was broken, Susanville couldn’t seem to stop scoring. Inning four saw a total of three runs from the boys, inning five saw three and inning six saw one.

While Moss only went 1-for-3, his one hit was a three-run homerun that initiated the scoring streak made in the forth inning.

As for defense, Zahniser led on the mound for two and two-thirds innings. He struck out three and gave up a mere two hits in total.

Kiar followed by pitching for two-thirds of an inning. He gave up three runs and three hits with one error.

Mallery was next to pitch for Susanville with a flawless finish for inning four and a scoreless inning five. Mallery struck out one and didn’t give up any hits or runs.

Moss started off inning six with two strikeouts. He also gave up three hits, one walk and two runs.

Chappuis returned to the mound to finish the game. He faced three batters and gave up one hit before closing the game with an unassisted force out at third base by Mallery.

Susanville had fought their way through a tough game and managed some sweet revenge with a 7-4 victory against Greenville.

The boys were then heading into game five against the undefeated host team, Modoc. If Susanville could best the Modoc team twice, they would be able to walk away with the District 48 Champion title.

Susanville started the game at bat and gave themselves an immediate advantage with two runs scored in the first inning.

The boys kept the offensive power strong throughout the game and earned another two runs in the fourth inning, one run in the fifth and one in the sixth.

Kiar led at bat as he went 1-for-1 with a two-run homerun score in the fourth inning.

Schall, Moss and Mallery each went 1-for-3 against Modoc, and Osborn was 1-for-4.

Cullison was first to throw for Susanville with two and one-third innings on the mound. He struck out four and gave up three hits, two walks and two runs.

Kiar followed on the mound but faced some trouble. Of the three batters faced, Kiar gave up two hits, one walk and a run.

Wright was next to pitch and gave up two hits and three runs on three errors.

Marshall then finished up the fourth inning by striking out the sole batter faced. He then returned for the fifth inning for more strikeouts.

Although the Susanville team fought hard, Modoc’s pitching proved to be too tough for Susanville’s bats and Modoc came out on top 7-6 to claim the District 48 Championship.

The close final game and the three wins of the tournament are nothing to scoff at, though, and the boys are more eager than ever to keep playing ball.