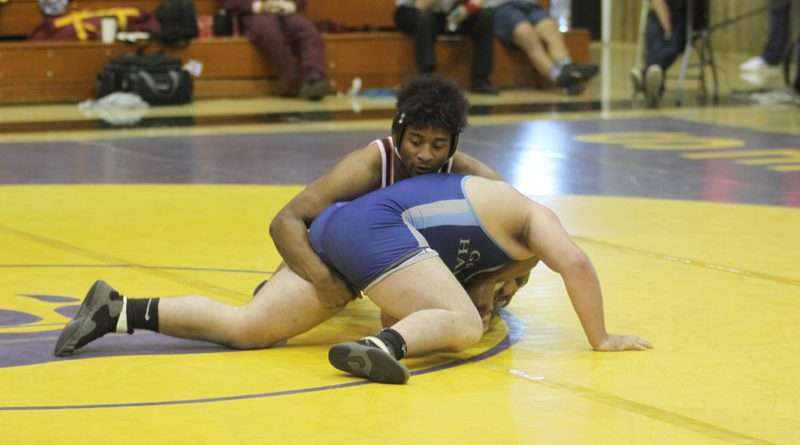 Of the six visiting teams, the Cougars had matches against Simpson, Umpqua and Grays Harbor.

Though the Cougar wrestlers performed extremely well on the mat, the small roster ultimately proved their downfall. Lassen lost 21-12 to Simpson, 27-12 to Umpqua and 45-7.

When taking on Simpson, Lassen sent Jonathan Campos, Tevin Bailey and Cole Mair on the mat for the 174-pound, 184-pound and the heavyweight division, respectively.

In the first Cougar match, Campos started out in the lead with a takedown that brought the individual score to 2-0. Soon afterward, though, the Simpson Red Hawk escaped to earn a point.

Lassen took down the Red Hawk once more to earn two more points, but the Cougar point-gain stopped there.

The Red Hawk gained two points via reversal, and with the action heating up on the mat, Campos ended up losing his shoe.

Though the first round ended with Campos in the lead 4-3, the Red Hawk refused to throw in the towel.

In the second and third round, the Simpson wrestler earned an additional six points via a reversal, near fall and takedown. The match was called with a final score of 10-4, Simpson, thus earning the opposing team three points.

Bailey was next on the mat, and he was not in the mood to mess around.

In the first round, Bailey took down his opponent immediately to earn two points. He then had two near falls in a row to bring his tally to six.

The Red Hawk escaped Bailey’s grasp to earn one point, but this only provided Bailey with another chance to take him down. Another two near falls brought the score to 12-1, Lassen.

With another escape, the Red Hawk managed to bring his point tally up to two before the first round was finished.

In round two, Bailey was ready to finish. With 1:32 remaining, he pinned the Red Hawk and earned six team points for the Cougars.

Mair was next to take on the mat. Though his match was not as intense as Bailey’s, Mair proved that just as much could be accomplished with patience and a strong strategy.

In the second round, Mair continued to stay calm, but fans could see the focus in his eyes. Once he saw his opportunity, Mair took down and pinned his opponent with 56 seconds remaining of the round.

However, with three Lassen forfeits due to lack of wrestlers, the Simpson Red Hawks still walked away with the 21-12 win.

Lassen then challenged the Umpqua College RiverHawks on the mat. Campos and Bailey again represented their respective weight classes, but for the heavyweight division, Mathian Saldana took the challenge.

Campos, still fired up from his first match, was ready to get things done when taking on the RiverHawk. With 1:32 on the clock in the first round, Campos was quick to pin his opponent and earn six team points for the Cougars.

Next on the mat was Bailey, who was eager to follow suit. A takedown in the first round earned Bailey two points, but the scoreboard became irrelevant once Bailey finished the match with a pin; two minutes remained of the first round.

For the third Cougar match, Saldana utilized the slow and steady strategy. Fans could see the focus in his movements as he tried to identify the RiverHawk’s weakness.

However, despite his attempts, Saldana did not end up on the winning side of the 2-1 final score. In the second round, Umpqua earned their first point via escape and their second when Saldana left the circle. Saldana earned his single point via escape in the third round.

Lassen then brought the heat to their match against the Grays Harbor Chokers with Campos, Bailey and Mair on the mat.

Campos started his match at a disadvantage as the Choker took him down to earn two points. Campos then escaped to give himself a fresh start and one point, but the Choker utilized the opportunity to take Campos down yet again.

Another exchange of escape and takedown occurred in both the second and third round; and with that, the Choker left the mat with the 8-3 win, thus earning three team points for Grays Harbor.

Bailey was at 2-0 for the Lassen Duals thus far, and fans could tell he wouldn’t settle until he earned win number three.

Bailey started his match just as on-fire as before. With a takedown and a near fall in the first minute, Bailey was launched into the advantage by four points.

An escape put the Choker on the board, but another takedown by Bailey made the escape moot.

The Choker then put up the greatest fight of the match when he had a strong grip on Bailey’s leg and had the Cougar hopping in hopes of not falling over. However, Bailey was quick on his toes and used the Gray Harbor wrestler’s weight and positioning against him to earn an additional two points for a third takedown.

At the end of round one, Bailey was in the lead 8-1, but he was yet to be satisfied.

Bailey was again first to change the scoreboard during the second round with an escape brining him to nine points. However, the Choker saw the time dwindling and managed a reversal before the clock ran out.

Round three started with a 9-3 score, but with another takedown made by Bailey, the round ended with 11-3 on the board. With the eight-point lead, Bailey won the round via major decision and earned four points for the Cougar team.

Mair was last to represent the Cougars against Grays Harbor, but he proved a grand finale for the Lassen team.

In the first round, Mair earned two points for a takedown and allowed only one escape by the Choker.

Round two included a takedown and an escape by Mair, and in the final round, Mair brought his point tally to seven with a near fall.

With a final score of 7-1, Mair left the mat with the win and three team points.

Again, though the Cougars wrestled well, their limited roster resulted in seven forfeits and a final team score of 45-7, Grays Harbor.