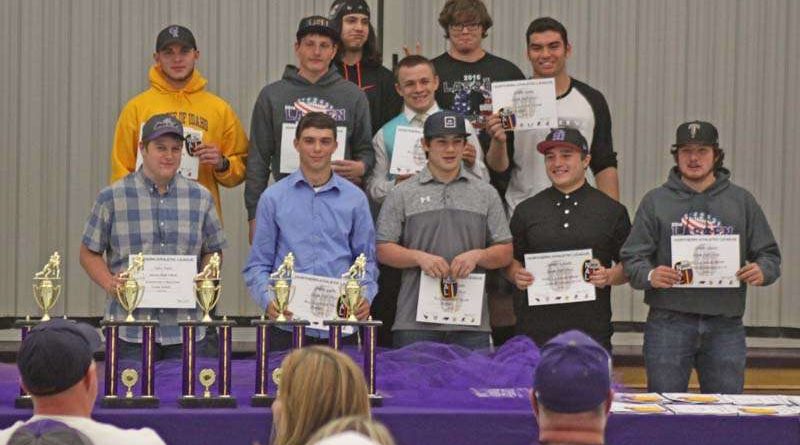 As the football season has officially come to an end for the Lassen High School Grizzlies, the varsity team was finally able to schedule an awards ceremony to honor the hard work shown by the boys throughout the season.

To start off the ceremony, coach Tom St. Jacques welcomed Jim Dandois to the podium to share a poem written in honor of his late son, Max.

The poem is titled “I Grew Up Being a Grizzly.” Dandois had written the poem for the senior football players who were once on a team alongside his son on Arnold Field.

Within the verses were individual comments and dedications to each senior by name. Looking among his audience, many parents and students were seen shedding tears.

The presentation was a perfect way to initiate the ceremony as it honored Max, while also highlighting his teammates for their final season.

St. Jacques took the podium once again as Dandois took his seat with applause in the background.

“What a wonderful season this team had,” St. Jacques said.

The coach then moved on to the first group worthy of recognition; the football booster club.

The boosters have done exceptionally well throughout the 2016 season and have undergone many changes. With new members of the board and some previous members releasing the reins, the transitions proved to be difficult while in the heat of the season; however, the boosters still served the teams and prompted more fundraisers than anticipated.

In addition to the booster club, St. Jacques also recognized the many parents who hosted a Thursday Night Dinner for the team.

Throughout the season, it was tradition for the players to gather over a home-cooked meal prior to a game in order to reestablish their friendship and communication.

Each family willing to feed not only their teenage son, but also the rest of the team and coaches, was given a box of See’s Candies.

This was also the perfect time for St. Jacques to recall all of the meals and express his disappointment that the tradition is on hold until the 2017 season starts up.

Next, the coaches were recognized. While St. Jacques is the head coach of the team, he expressed how the team’s success over the years would have been impossible without the help of coaches Paul Moore, J.T. Terrell, Jason McMullen and Jim Hansen.

St. Jacques said that throughout his 35 years coaching football, the 2016 team is one of his most talented and most hardworking.

Once the many adults who assisted the team behind the scenes were recognized, it was time to put the spotlight on the players.

The first subject of recognition for the players was academia.

St. Jacques introduced the subject by commenting how odd of an experience it was for him to enter the locker room and continuously overhear conversations regarding AP courses.

Clearly, many could classify this group of young men as abnormal.

Korbin Drake was also recognized for his hard work academically, but a single B+ kept him away from the certificate.

Next up on the agenda were the league certificates.

The awards presented from the league were voted on by the seven North American League coaches, excluding the home team’s coach.

As the Grizzlies were the 2016 NAL Champions, it came as no surprise that so many awards were given to the purple and gold.

The honorable mention awards from the league required four out of seven votes. The recognition is still an extreme honor among the teams in the league.

Additionally, the NAL also voted on Most Valuable Players of the league.

Hunter St. Andre was voted as the MVP offensive player of the league.

The evening then continued to honor each member of the team with his own certificate from the school.

St. Jacques was sure to provide commentary on every individual to ensure the entire audience that the 2016 varsity football team will not be forgotten. Clearly, the impact of each individual member made a difference on the field.

The next awards were those of the Lassen coaches’ choice. The recipients received a trophy and, of course, a round of applause.

The Mad Grizzly Award was given to Jones.

There were two Coaches Awards given out during the ceremony. The Lassen coaches commented that the recipients of the Coaches Award had to display traits such as desire, dedication, determination and attitude.

The first Coaches Award was given to quarterback Travis Wood. Coach McMullen commented that Wood was “a coach’s dream.”

The second Coaches Award was a poster child for the four traits mentioned, as said by coach Hansen. The award was presented to Seibt.

Swayze earned the Best Hands Award as the coaches noticed how nearly every pass thrown in Swayze’s way was caught.

Tucker St. Andre earned the Best Linebacker Award and became the only sophomore on the varsity team to be honored with a coach-chosen award.

Lassen coaches also decided on the final set of awards. The recipients were honored with a plaque with half of a Grizzly helmet attached.

The first player to be recognized with one of the final awards was Loflin. Coach Moore commented, “He is by-far one of the nicest kids I’ve ever been around. Not only is he a nice kid, he’s a very good player and he always asks questions. He always wants to know exactly what’s going on because he always wants to be in the right position.”

The Offensive MVP Award was actually given to two players on the Grizzly team. Not only were the two great teammates to Lassen as a whole, but also continuously worked well together on the field.

Coach Terrell commented that the two players were dedicated from the first game on as they both studied the videos to know what each individual should be doing on the team.

The two Offensive MVP Awards were given Colby Harris and Korbin Drake.

The Co-MVP Awards were given to Hunter St. Andre and Chavez. The boys were recognized for their dedication to the team and their willingness to not only take responsibility for their actions, but also those of their teammates.

Coach McMullen commented that Hunter St. Andre and Chavez did not see much time off of the field, as they were able to keep the team together.

McMullen said, “Team sports really need leaders, and that’s what this class had.” He later continued, “That made a difference this year. These guys had to put themselves out there in front of their teammates, their friends, sometimes to ridicule, but they have to step out in front and take that leadership ability and it takes a special kind of guy to do that. These guys have that heart that you can’t believe.”

St. Jacques closed the ceremony by saying, “Something that you can’t coach is heart. You can’t coach it. We can tell you where to be, what to do, how to block, how to tackle, but you can’t coach heart. That’s what this team has. That took us to 11 wins, a NAL Championship and a ticket to the section title game.”

The Grizzlies have officially put football into hibernation until the fall 2017 season rolls around. They now intend to either participate in winter sports or support their fellow classmates as they play on the field, court or mat.