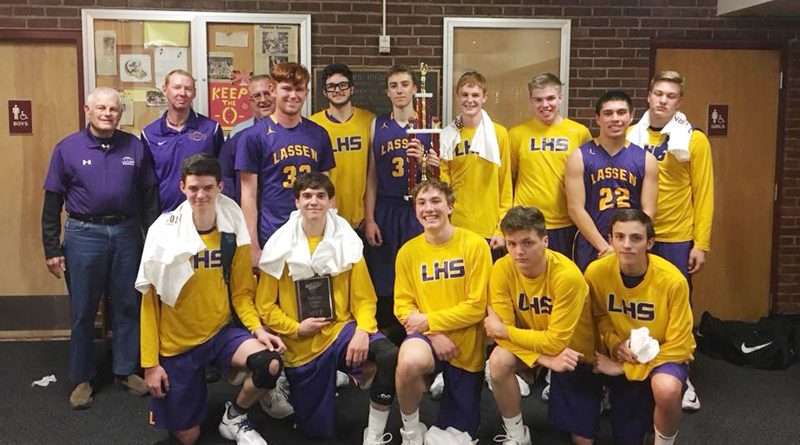 The Lassen High School varsity boys’ basketball team finished off 2017 with a winning streak of five.

Lassen started their streak with a home game against Modoc Dec. 21. They then took on the Rail City Classic at Sparks High School where they took on and took down Coral Academy of Science – Reno, White Pine, McDermitt and Yerington between Wednesday, Dec. 27 and Saturday, Dec. 30.

While at home, Lassen faced the Modoc Braves with stands full of fans cheering them on.

Brand Satica started the cheering with his block at 7:24 and both Neil Growdon and Will Ashmore kept fans on their feet with three baskets by the time Modoc had tried their hands at the free throw line.

Though one free throw was good, the Grizzlies didn’t let it throw them off of their groove. Another basket by Growdon and a free throw by Satica brought the score to 9-1, Lassen.

Modoc had another shot at the free throw line at 2:28 and managed to get two in, but Ashmore countered with another basket to make the Brave achievement invalid.

Modoc was first to take the spotlight in quarter two with a layup at 7:35, but a basket by Jacob Bennett started the Grizzly cheers back up again.

At 4:59, Cole Dyer intercepted a Brave pass and dribbled down court for another basket to bring the purple and gold team to 16 points.

Though the Grizzlies were in the lead 16-10, their luck didn’t last long.

At 4:04, the Modoc Braves took over the court with an overwhelming sense of power. Within the span of three minutes, the Braves managed five baskets and thus swiftly stole the lead from Lassen 20-16.

Cole Olexiwicz refused to let the half end on such a sour note, however, so with 53 seconds on the board, Olexiwicz swooped in and hit a three-pointer to bring the halftime score to 20-19, Modoc.

Satica was first to score in the second quarter with a hook shot at 6:51, and though his basket granted Lassen the lead, it didn’t secure it for long.

Two minutes into the second half, Modoc sunk one basket and was closely followed by a second.

Satica again attempted to steal the lead with a basket, but Modoc was quick to counter with a two-point field goal and a three-pointer by 3:52.

Satica gave it a third try to take the lead with a rebound shot. Then, with a basket from Bennett, the Grizzlies made it to 27 points.

Modoc wouldn’t let up, though, as a free throw put them in the lead 30-27 with less than three minutes remaining of the quarter.

Then, Bennett tied up the score with a three-pointer at 1:37. Ashmore followed up with a steal and a layup to take the lead, but the Braves only found the Grizzly efforts irritating.

In a fit of spite, one Brave sprinted down court with the ball, leapt and dunked with a fierce look in his eye.

However, with a three-pointer by Ashmore to end the quarter with Lassen up 35-32, the Grizzlies could only smirk.

The Braves tried their best to knock the smile from the Grizzly faces with a basket with 7:46 remaining of the game, but Bennett countered with another three-pointer at 7:33 to make the Braves’ efforts even more humorous.

The Braves then put their entire being into the game and managed to hit two baskets and a free throw by the time the clock hit four minutes.

Though Modoc had caught up, they had yet to take the lead, and with another three-pointer by Growdon, it stayed that way.

With 2:50 on the clock, Modoc managed another good free throw and brought the score to 43-40, Lassen.

With one and a half minutes on the clock, Growdon hit a basket and the Braves got angry.

Modoc made their seventh foul at 0:28 against Growdon. Though his free throw wasn’t successful, it ended up in Spencer Lively’s hands just long enough to allow the Braves to foul again.

Another set of no good free throws continued until 0:24 shone on the clock and the Braves made their 10th foul against Growdon.

Growdon shot and made one of two free throws and thus introduced the final score of 47-42, Lassen.

Head coach Paul Moore commented, “It was a hard fought victory. Our defense saved us yet again as we held them to 42. We had good looks tonight we just didn’t make them. And our free throws are something we have to get better at.

“We had a bunch of guys sick but we were able to show a lot of heart to come away with a win. Modoc is one of the bigger teams we will play at 6 foot 7 inches and 6 foot 5 inches and the height caused us problems, but we found a way to win”

After taking down the Braves at home, Lassen traveled to Sparks High School for the Rail City Classic starting Dec. 27.

First to suffer their fate against the Grizzlies was the Coral Academy of Science – Reno Falcons.

After outscoring the Falcons in every quarter, it came as absolutely no surprise when the final buzzer rang and the Grizzlies ended up with an overwhelming 62-35 win.

Leading the team in scoring against the Falcons was Growdon with 14. Bennett made 12 points and Lively scored eight.

Next on the menu for the hungry Grizzlies were the White Pine Bobcats.

Lassen started big by outscoring the Bobcats 20-10 in the first quarter. They then did an even more miraculous job on the court in quarter three by outscoring White Pine 20-6.

Satica and Ashmore led the team in points with 11 each. Bennett scored eight.

Lassen then took on the McDermitt Bulldogs on Friday, Dec. 29 and finished on top 65-39.

Lassen had a stellar first half of the game against the Bulldogs, which allowed them to take the second half easy.

In quarter one, Lassen outscored the Bulldogs 24-12. They then kept it up by outscoring them 21-6 in quarter two. In the second half, McDermitt scored 21 points compared to Lassen’s 20, but the one-point lead wasn’t enough to overcome Lassen’s preestablished foundation.

Growdon led the boys on the board with 16 points brought in throughout the game. Bennett had 15 and Lively had 11.

With a 3-0 record thus far, the Grizzlies had solidified their spot in the championships.

Regarding the championship game against the Yerington Lions, Moore said, “The Grizzly boys won the Sparks tournament with an exciting 59-58 win over Yerington. The Grizzlies never lead until the final minute of the game. No team lead by more than eight points in a highly played game.”

However, Lassen never gave up. In quarter four, the Grizzlies truly showed their resiliency by outscoring the Lions 23-17 and thus securing the win by a single point.

Ashmore had 20 points in the championship, six of which were scored in the final two minutes. He was named Tournament MVP.

Brand Satica, who earned 10 points in the game against Yerington, and Jacob Bennett, who earned nine for the team, were both named to the All-Tourney Team.

After taking on the Rail City Classic, the Grizzlies finished 2017 with a 9-3 record.