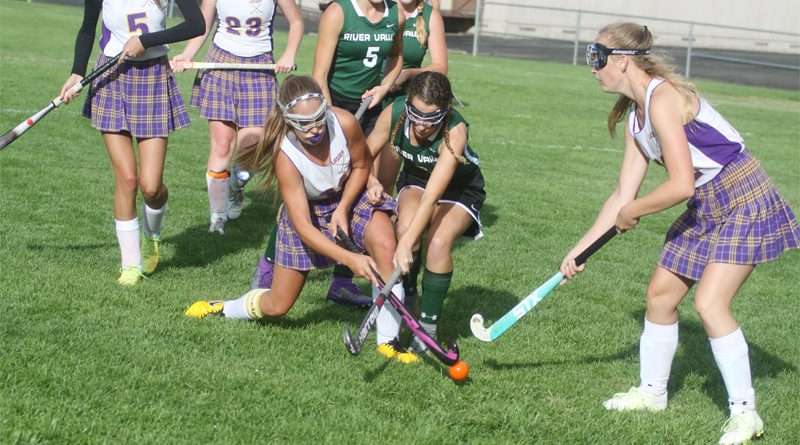 When the River Valley Falcons entered the field hockey field at Lassen High, no one knew just how intense of a defeat they would face. But once the game began, it became clear that the Falcons were in danger of early molting.

The varsity Grizzlies were greeted with strong winds and cold rain, but the lack of warm temperatures didn’t stop the Grizzlies from feeling the fire in their hearts.

The final score of 5-0 was brutally attained by fearless Grizzlies who were not afraid to play with their food.

The first goal made by the Lassen High Lady Grizzlies was within the first seven minutes of the game’s start. Melanie Gatie had kept strong control of the ball when initially getting it across the 50-yard line and after an assist from Emma Newton, Gatie secured the first goal of the game.

The girls sprinted up and down the field numerous time, but not a hint of exhaustion was seen from the adrenaline-fueled Lady Grizzlies.

Lassen earned three consecutive short corners between their first goal and the 11th minute of the game. The short corners allowed fans to truly recognize just how far the team has come since the first game.

With each short corner, the Grizzlies had a great pass out of the circle, a drive back into it and a shot on goal.

During the third short corner, Newton shot the ball into the goal cage, but a whistle blown moments before the ball left Newton’s stick ruled the goal no good.

While the hype of a second goal was met with unwelcome feelings of disappointment, the Grizzlies refused to lose determination.

With 18:14 remaining of the half, the Grizzlies proved just how far they would go to keep the inner fire burning. The second goal of the game was made by Madee Cluck, unassisted, after a huge breakaway was made from the Lassen circle.

After gaining a second goal, the Grizzlies found themselves giddy on the field. The Falcons, however, were going to try to snuff out the fire.

However, River Valley should have been aware that playing a fire only results in burns.

Lassen regained possession and fans watched in glee as Savannah Huskey and Newton tag teamed to gain 60 yards for the purple and gold.

Lassen showed great passes with a lot of passion while on the field and with such focus came easy recovery. With River Valley determined to make it to the Grizzly circle, Lassen was able to assess the weak points of the Falcon strategy and take advantage. In less than a minute, the Grizzlies were able to bring the ball from their circle to the River Valley circle, nearly effortlessly.

By halftime, the Grizzlies were up 2-0, still warm from their inner flame. Coach Reesa Rice reestablished humility in the girls by asking them to pretend the score was still 0-0. With this strategy, the girls regained their hunger for a goal, thus making them even harder to touch.

The Lady Grizzlies took the advice to heart and made their first goal of the half within the first two minutes of game play.

Once the ball had made it into the River Valley circle, Gardiner knocked the ball into the goal cage and fans both held their breath and felt their hearts race as the goalie reached the ball first. However, luck was on the Grizzly side as the ball ricocheted from the goalie’s pads to the back of the cage, thus, a third Grizzly goal was made.

Less than one minute after restarting from the 50-yard line Lassen managed to steal the ball, enter the River Valley circle and earn a short corner. Though the ball didn’t make it in, the Grizzlies kept at it.

River Valley made it to the Grizzly circle with the ball, but Dori Davidson was patiently waiting for her time to shine. With the ball in her grasp, Davidson jabbed it away from the offensive Falcon and hit a strong pass to Huskey.

After receiving the ball, Huskey dribbled down the sideline and ultimately crossed the 50-yard line with nary a defender to stand in her way. Of those that did cross her path, Huskey easily showed off her ability to dodge and kept on her way.

With 17 minutes remaining of the half, Lassen scored their fourth goal to bring the score up to 4-0.

The fourth goal was the result of a great pass across width the field made by Kaylee McGuire to Huskey. Huskey then passed up field to Newton, who brought the ball into range of the goal.

Upon entering the River Valley circle, Newton appeared to have caused panic among the defensive Falcons, including the goalie. As the River Valley goalie took a risk by sprinting to the ball, hoping to kick it out of the circle, she ended up falling on the ground along with Newton, thus leaving the cage open for Grizzly pleasure.

Without missing a beat, Newton made a quick pass toward the empty goal, and with only a few River Valley defenders in her way, Cluck pushed the ball into the cage and secured the fourth Grizzly point.

During the battle for the ball as it neared the goal cage, many Grizzly and Falcon players entered the cage as well. Once the goal was made, one Falcon fell into the net and caused the hoard of girls in the general vicinity to burst into fits of giggling. At this point it was clear that both teams were having a blast at the game.

The field was reset and River Valley took possession yet again, but with less than 15 minutes remaining on the clock, the Lady Grizzlies stole possession and found themselves in the River Valley circle yet again. A short corner was called for the Grizzlies, but a fifth goal was yet to be made.

After two sessions of intense struggle at the Falcon goal, River Valley found a break in the Grizzly defense and took advantage. The Falcons had the ball in Lassen’s circle within 30 seconds of the breakaway.

A short corner was called for the Falcons and they were clearly ready to score. However, though it seemed a perfect opportunity to allow the Falcons to score, McGuire was not having it. Upon seeing her chance with the ball, she eagerly took it to drive the ball out of the circle and into Grizzly offensive possession once more.

Within 80 seconds of game play, the ball was back in River Valley’s circle, begging for a goal. Newton was there to do just that.

With 3:36 remaining on the clock, Newton drew out the Falcon goalie once more, this time taking the scoring opportunity for herself. A 5-0 score found its way into the books.

River Valley continued to play hard until the end, though, as they managed to rush from their circle to that of Lassen’s prior to the whistle blowing to end the game. Though no goal was made by the Falcons, the effort was commendable.

After exchanging a few “Good game” mantras and high fives between the two teams, Lassen gathered in the field’s center to begin a chant of “You wish you were a Grizzly,” with the game’s ball at the center.

The varsity girls made it clear that the win was due to each player kissing the ball before the game’s start. Rice commented it was thanks to the skill seen on the field, but the Lady Grizzlies still thanked the ball.

Rice said, “They’re pulling themselves out of their funk. They’re playing as a team now.”

The varsity coach’s confidence indicates that while fans may expect a lot from the Grizzlies, the Lady Grizzlies will more than happily deliver throughout the season.

Rice later said, “(Lassen) scored two during their game against Davis, and its clear they carried that momentum into this game.”